Observability with AIOps For Dummies
Cost of Downtime Report
Splunk IT and Observability Predictions 2022
Splunk Executive and Emerging Technology Predictions 2022
AIOps Benchmark Report
Pragmatic AIOps: A Buyer’s Guide
Enrichment for Faster Event Correlation and Root Cause Analysis
APIs in Action
How to Optimize Digital Experience with Service-Level Objectives
The State of Observability 2021
The 2021 Kubernetes & Big Data Report
Improve Performance with Real Insight Into How Queries are Executing
Spark on Hadoop: A Quick Guide
Big Data Cloud Technology Report 2021
Infrastructure Monitoring 101: The Power to Predict and Prevent
The 5 Foundational DevOps Practices
Get Your Cloud & Hybrid Migration Strategy Right in Government
Scalability in Cloud Computing
AI and Machine Learning in Your Organization
Making Sense of Digital Experience Monitoring Solutions
APIs in Action: A Guide to Monitoring APIs for Performance
Six Cloud Strategy Pitfalls and How to Avoid Them
5 Things to Consider When Choosing an APM Tool
The Guide to Modern APM
Splunk Predictions 2021: Executive Report
Fast-Track Your Multicloud Monitoring Initiative
The Essential Guide to Container Monitoring
The Data Age Is Here. Are You Ready?
CIO Dive: How AIOps Cuts Costly Downtime and Supports Teams
Autonomous Operations: How to Intelligently Automate and Scale IT Operations at Global Enterprises

BigPanda announced that nominations are open for the 2021 Incident Commander Awards.

The second annual awards will honor individuals in support, ITOps, DevOps, SRE or in the NOC who go above and beyond when it comes to IT incident response.

BigPanda and Blackrock 3 Partners launched the Incident Commander awards last year as a community-led program designed to give credit to the unsung heroes working in IT Ops, DevOps, SRE and NOC teams around the world.

“Last year’s Incident Commander Awards program put a spotlight on truly amazing individuals nominated by their bosses, peers and customers,” said Rob Schnepp, founding partner of Blackrock 3 Partners and a former fire department Chief Officer and Incident Commander in the San Francisco Bay Area. “If last year’s nominees are any indication, we expect another tough competition between the best-of-the-best in the IT Ops industry.”

- Jackson Hickman, Manager of IT Delivery and Incident Management at Unum (Incident Commander)

“An Incident Commander has the ability to connect the dots and get a holistic view of things,” said 2020 honoree Sharmila Sogan Kumar. “The experience and knowledge of an Incident Commander help them provide and identify major improvement areas. In the long run, this is extremely useful for product availability, revenue from users, and customer satisfaction.”

About the 2021 Incident Commander Program

To nominate an IT hero who measures personal success by reducing MTTR, visit the Incident Commander nomination page. The nomination process takes just a few minutes.

On Sept. 1, finalist profiles will be posted online, with details about their nomination and brief profiles of their career, philosophies and achievements. Peer voting will be open to the IT Ops community to select the most deserving of this award. Winners will be announced on Sept. 20.

The three lucky Incident Commanders will each receive a $2,500 gift card from Global Giving to donate to the charity of their choice, a Blackrock 3 partners Level 1 Incident Commander training course, a shiny trophy, and BigPanda swag. In addition, those who nominate someone will receive a BigPanda swag pack just for taking a few minutes to recognize someone doing great work in the world. 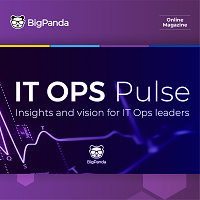 The shift to containers and microservices is a key component of the digital transformation and shift to an all encompassing digital experience that modern customers have grown to expect. But these seismic shifts have also presented a nearly impossible task for IT teams: achieve ceaseless innovation whilst maintaining an ever more complex infrastructure environment, one that tends to produce vast volumes of data. Oh and can you also ensure that these systems are continuously available? ...

As part of 2022 APM Predictions list, APMdigest asked industry experts to predict how Digital Transformation will evolve and impact business in 2022 ...

As part of APMdigest's list of 2022 predictions, industry experts offer thoughtful and insightful predictions on how Cloud will evolve and impact business in 2022 ...

As part of APMdigest's list of 2022 predictions, industry experts offer thoughtful and insightful predictions on how Network Performance Management (NPM) and related technologies will evolve and impact business in 2022 ...