In Fall 2016, Paessler AG surveyed 650 system administrators from 49 countries to get a "state of the SysAdmin" and find out how their jobs are changing, how they spend their time, and what their priorities are. The survey responses led to some interesting findings – namely, that when it comes to today's SysAdmins, things are not as they seem. Here are some of the key findings that illustrate the gap between perception and reality.

The survey results show us that the role of the SysAdmin is undergoing great change. In fact, 30 percent of respondents indicated that their career has changed completely in the past five years. Also, nearly half of the respondents, 48.6 percent, indicated that their job has undergone "some change" in a five-year period. Only 5.7 percent of respondents thought that their job was the same as it was five years ago. Looking at this high level of change, I wonder if the trend will continue and how different things will become for the SysAdmin over the next five years.

Time – Not as it Seems

Also, we asked what technology services they are using or are actively planning to implement. Among the top responses were virtualization, cloud, cybersecurity and network monitoring. And, while the following topics may be widely covered in the media, few of the respondents reported plans for projects with IoT, Big Data management or Software Defined Networking (SDN).

One thing that may reflect the changes in the time spent on their day-to-day job is their titles and how they describe themselves. Among the respondents, the majority identified themselves as generalists, while only 28.7 percent described themselves as IT specialists.

The survey results showed that Microsoft certifications are most popular (45.6 percent of respondents) followed by Cisco (26.8 percent), VMware (17 percent) and CompTIA (13.8) percent. For education, 40.8 percent of those surveyed had an academic degree, compared with 35.6 percent with vocational training and 23.6 percent who learned on the job.

In all, the SysAdmin that we think we know today might actually be quite different than those walking the halls at our customers or in our own companies. In fact, one more figure could reflect a gap in perception – 39.7 percent of respondents indicated that they did not believe that IT vendors understood the challenges that they faced. Maybe as perception catches up with the reality of today's SysAdmins, vendor understanding will improve as well as an overall, industry-wide understanding of what being a SysAdmin is really like.

Dirk Paessler is CEO and Founder of Paessler AG. 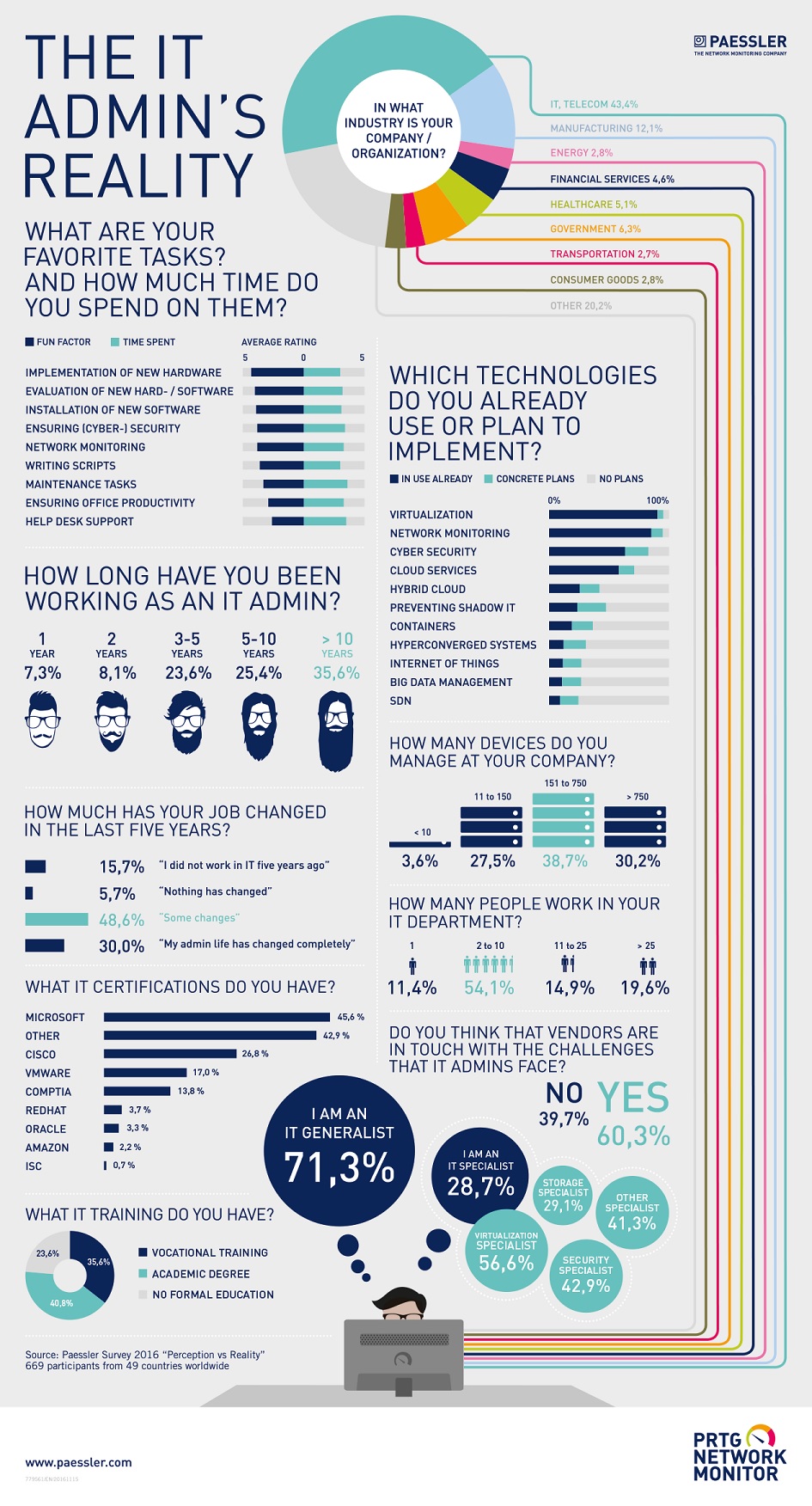