Although organizations are rapidly deploying emerging unified communications (UC), cloud, mobile, and network technologies, network teams lack visibility into applications and end-user experience due to relying on legacy monitoring tools, according to the Sixth Annual State of the Network Global Study by Network Instruments.

- Mobile challenge: Over half considered Bring Your Own Device (BYOD) to be the most difficult technology to monitor

- Migrating to cloud: Nearly half of applications will run in the cloud in the next 12 months

- Don't trust the cloud: 80% cited data security as the top concern when shifting to the cloud

- Application anxiety: 68% indicated the top application troubleshooting challenge is determining the root cause of performance problems

"Many technologies we spoke about as emerging a short time ago, such as BYOD, videoconferencing, and 40 Gb, are quickly approaching mainstream status, as companies look to quickly boost productivity and cost savings," said Jim Frey, VP of Research for Enterprise Management Associates (EMA). "Unfortunately, many network teams are relying on outdated monitoring strategies to manage performance and user expectations for these new initiatives."

"What's particularly challenging about this moment in time for IT is that the focus isn't on one disruptive technology; rather, engineers have to establish and maintain visibility into the cloud, mobile devices, and real-time communications, all while dealing with increased user and business expectations," Frey added. "IT teams will need to invest in management solutions that cover and correlate performance across as many of these new applications and infrastructure technologies as possible, and ideally all of them."

Organizations are moving beyond VoIP and embracing multiple technologies under the UC banner. While VoIP deployments remain steady with 70% deployment, more than 60% have deployed instant messaging and videoconferencing. This marks a growth of 35% in adoption of these two technologies over the last four years. Additionally, more than half of organizations in 2013 have deployed web collaboration applications.

While UC applications have emerged into the mainstream, monitoring still lags. More than two-thirds indicated lack of visibility into the user experience to be their biggest UC management challenge. This was followed by difficulties assessing bandwidth utilization by UC programs (39%), and an inability to view communications at the network edge (29%).

Overall, cloud adoption has increased significantly over the past year from less than 60% in 2012 to nearly 70% this year. Most notable in terms of deployment trends, private cloud adoption (39%) has increased by 12% from last year. In addition, 14% indicated their organization implemented external private cloud services, such as Amazon Virtual Private Cloud (VPC), Savvis Symphony Dedicated, and Citrix Cloud.com.

On average, organizations expect nearly half of applications to be running in the cloud within the next 12 months. The top four cloud services were: email (59%), web hosting (48%), storage (45%), and testing and development (41%). Interestingly, 23% of respondents had migrated VoIP to the cloud. More complex services like Enterprise Resource Planning (ERP) remain largely hosted locally with only 16% hosting in the cloud.

Data security (80%) remains steady as the top management concern over the last two years. Other top concerns included compliance challenges (39%), lacking the ability to monitor user experience (36%), and an inability to assess the bandwidth impact of cloud services (35%). In spite of the management challenges, 43% noted improved application availability and 37% noted improved end-user experience in moving to the cloud.

Seventy-seven percent of organizations will utilize 10 Gb networks in the next 12 months. This marks a growth of 52% over the last four years. Additionally, 20% of respondents will migrate to 40 Gb in the next year.

As applications and networks grow in complexity, the ability to resolve service performance issues grows. Nearly 70% of respondents said the largest application troubleshooting challenge was identifying the problem source.

"The good news is that IT is achieving increased application availability with multiple new technologies, but network managers' anxiety remains high as they struggle to monitor end-user experience using legacy tools," said Charles Thompson, director of product strategy for Network Instruments. "IT is cautiously optimistic as they implement UC and cloud services, due to security, compliance, and monitoring concerns. As monitoring strategies offering broader visibility are implemented, IT will take greater advantage of these emergent technologies, including deploying UC enterprise wide and migrating more mission-critical applications to the cloud." 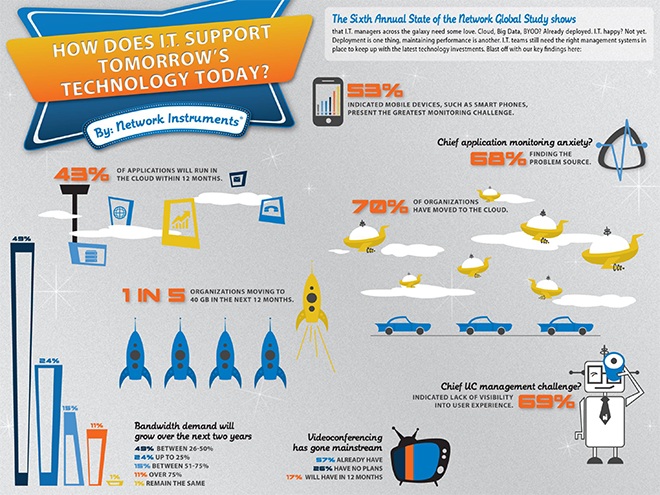 About the State of the Network Global Study

The State of the Network Global Study has been conducted annually for six years. This year, Network Instruments engaged 170 network professionals to understand and quantify new technology adoption trends and daily IT challenges. Respondents were asked, via third-party web portal, to answer a series of questions on the impact, challenges, and benefits of UC, cloud computing, and application performance management.

The results were based on responses by network engineers, IT directors, and CIOs in North America, Asia, Europe, Africa, Australia, and South America. Responses were collected from January 25, 2013, to April 30, 2013.