Transforming Your IT Experience with AIOps & ITSM
The Next Normal: Can We Be Remote and Productive Forever?
zDesk Remote, Secure and Optimized Work Environment for Healthcare
How Secure is Your Remote Enablement?
DevOps & Observability Best Practices
Moogsoft Enterprise 8.0 Live - The Virtual NOC is Here!
Fireside Chat: How AIOps Delivers Business Benefits
Who’s Who in IT Incident Management: The Incident Commander
Fireside Chat: Use Cases and Deployment Tips for AIOps with Observability
Increase Efficiency and Reduce Cost and Risks with XLAs for SAP
IT Ops Demystified: Event Chaos or Enrichment?
Moogsoft Express Live - The AIOps & Observability Solution for Cloud-First Companies is Here
An Overview of Roles in Incident Management
IT Ops Demystified: Can Observability Improve IT Ops?
I Have an SLO. Now What?
DevOps Open Source Insights and Innovations - Splunk Virtual Event
Future-Proof Your Applications with a Redefined APM Approach
How to Ensure the Performance of Your Cloud-Native Apps
The Future of APM: Bigger, Smarter, More Integrated
Do Legacy Root Cause Analysis (RCA) Techniques Still Work for Modern, Fast-Moving IT?
Can AIOps Reduce the Noise?
Make the Most of Your APM/NPM Tools with AIOps
Autonomous or Bust - What Is The Future of IT Operations?
Can AIOps Cure Your Service Desk Problems?

Key highlights from the TEKsystems 2018 IT Forecast survey include: 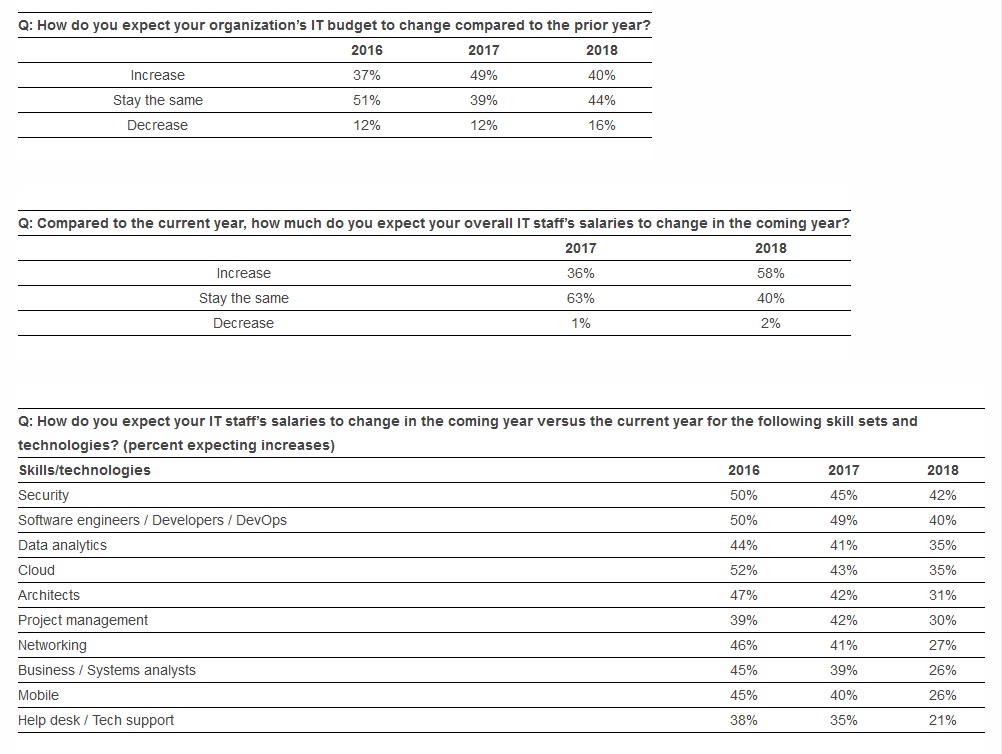 TEKsystems Take: It’s clear that 2018 will not be the year of increased IT budgets — those expecting IT budget increases are close to the lowest levels seen in the previous five years. However, in the face of declining budget expectations for 2018, a high number of IT leaders — 58 percent — also indicate that they expect overall IT staff salaries to increase in the coming year. Many of those increases are likely to be marginal due to cost-of-living allowances. Apart from marginal increases, it is also possible that IT managers considering new initiatives in the coming year are anticipating the need to pay increased salaries to individuals possessing high-demand skill sets related to specific initiatives. TEKsystems notes that overall, a declining number of IT leaders are indicating that they expect to increase salaries for key roles in 2018. This may be explained by the fact that while fewer are expecting to increase their hiring of full-time staff for the coming year (those expecting to increase full-time hires for 2018 declined by 7 points to 38 percent), there is a 6 percent uptick in the number of IT leaders expecting to increase outsourcing in 2018.

Ability to Satisfy Organizational Demands for Core IT and Lines of Business Diminishes; Confidence in New Initiatives Remains Unchanged

TEKsystems Take: Although high, confidence in satisfying core IT demands dropped 10 percent from 2017 levels, and confidence in satisfying new initiatives has not improved from 2017. This relates to budget expectations: As fewer IT leaders are expecting an increased budget in 2018, their ability to satisfy demands will come into question due to fewer resources at their disposal — this even in the face of expected increases in overall IT staff salaries. Organizations must examine this closely as the ability to simultaneously support core IT activities and new initiatives will have a significant impact on the business. These new initiatives, including Internet of Things (IoT), artificial intelligence (AI), augmented reality / virtual reality (AR/VR) and Blockchain, could weigh heavily on future success and partially determine whether they will disrupt — or be disrupted.

TEKsystems Take: In terms of new initiatives, IoT, AI, AR/VR and Blockchain are lagging in development. TEKsystems’ data show that relatively few respondents indicate that AR/VR and Blockchain initiatives are in the implementation phase. A significantly high percentage of respondents have indicated that they have nothing planned in the next 12 months for IoT, AI, AR/VR or Blockchain. This is somewhat unusual, given the potential positive impacts of both IoT and AI solutions, and can be contrasted to other key initiatives such as digital marketing and big data analytics, which are further along on the maturity curve. Part of the lag in implementing key new initiatives may be explained by the fact that IT leaders are not as confident in their ability to satisfy and support new initiatives. This can be attributed to a lack of budget and the overall trend of decentralization of IT, whereby the actual decisions on these initiatives are being taken out of the hands of the IT department.

Programmers and Developers Still the Most Critical Roles Driving Success; IT Managers, VPs and Directors Declining in Influence 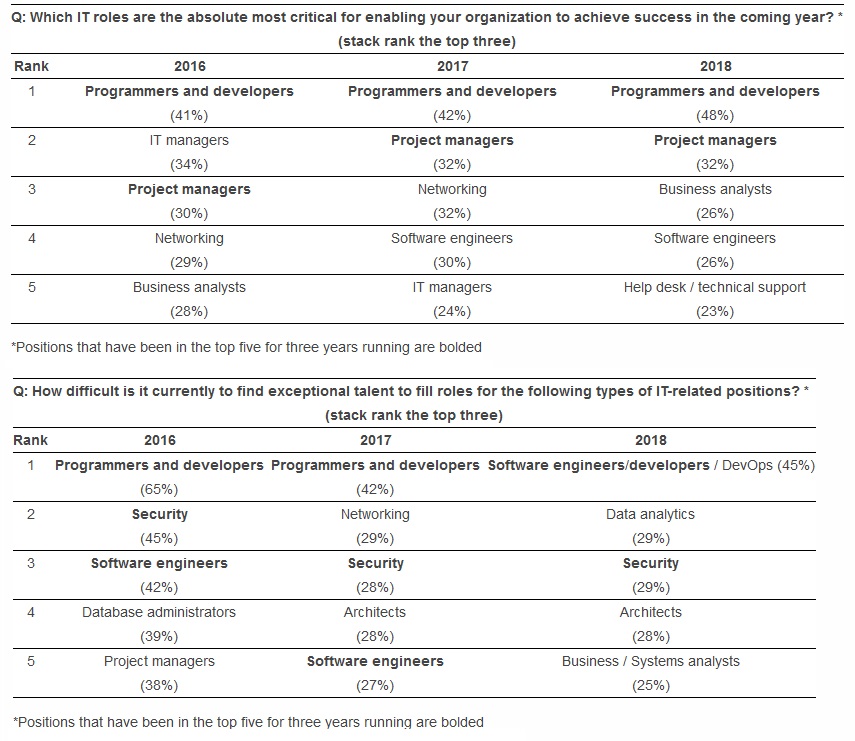 TEKsystems Take: Looking at the critical roles that enable an organization to achieve success, it’s logical that programmers/developers and project managers would be ranked highly; however, there appears to be a shift in the importance of business analysts and help desk/technical support roles now being considered critical. It also should be noted that VP and director-level IT leaders — ranked among the top five in 2015 when considering the most critical roles for enabling the organization to achieve success — has yet to crack the top five in any year since.

TEKsystems believes that key IT initiatives have the potential to change the business and also change IT staffing goals. As these projects move outside the control of the centralized IT department, its staffing needs change. Consider that when asked about the difficulty in finding exceptional talent to fill IT roles, business systems analysts and data analytics professionals are now prominently mentioned. Interestingly, networking roles are no longer considered critical to achieving success or difficult to find. TEKsystems believes this is another indication of the changing nature of the centralized IT department — one where the responsibility for new initiatives is shifting and responsibilities are turning more toward keeping the lights on (e.g., security and data center) and running an efficient organization.

Increased Efficiency a Top Business Objective in 2018; IT Leaders Expect Transformation in the Next 12-24 Months

TEKsystems Take: In 2018, the need to improve efficiency topped the list of business objectives that IT will most need to support in the coming year. This marks the first time that improving existing or implementing new IT applications or infrastructure did not top the list, and supports the finding that centralized IT is becoming more responsible for maintaining established IT solutions, especially in the areas of security and data, and less responsible for newer IT initiatives.

“It appears as though the traditional, centralized IT department is becoming a thing of the past. IT leaders and their departments are being asked to do more with less, as we’re seeing a decrease in IT budgets with tech spend moving outside of centralized IT. That being said, the responsibilities for ‘keeping the lights on,’ including data integration, information security and a host of other duties, remain. This could also be why we see less confidence and movement in launching new initiatives within the department,” said Jason Hayman, TEKsystems Research Manager. “With the migration of tech spend and decision-making to other areas of the business, we’re also seeing a change in the roles and responsibilities of the traditional executive IT leader. The urgency for digital transformation continues to be a major driver for organizations, and could lead to a diminished or altered role for incumbent technology decision-makers as areas of the business continue to take more ownership of their technology initiatives. Adding to this difficulty will be the ever-present war for talent, as organizations are realizing that wage stagnation and the incredibly competitive tech labor market can’t coexist indefinitely, meaning that more money will have to be spent to attract top talent.”