Campus Networks Getting Schooled on BYOD and What This Means for the Enterprise
May 23, 2014

There is an old saying that if you want a glimpse into the future, take a look at the college campuses of today. This is where our next generation of employees are not only honing their business or technical skills, but developing the work habits that IT will need to support in the enterprise.

To get a clearer picture of what the future holds for the network, Ipswitch conducted a survey on the impact of bring your own device (BYOD) on college campuses. Based on the poll of 313 higher education students, the enterprise had better be prepared or it could be in trouble a few years down the line. The survey found that 67 percent of students had a minimum of 2-4 wireless devices connected to the campus network at all times. Laptops were the top percentage getter at 86 percent, followed by smartphones at 77 percent and tablets at 30 percent.

Despite the fact that students are more connected than ever and creating a huge bandwidth drain on campus networks, they had little to no appreciation for the impact that their multiple devices are having on network performance. This should not be confused however with network satisfaction. Students have high expectation for network performance and were quick to voice their displeasure when it did not meet their expectations. The top concern registered by students regarding their campus Wi-Fi networks was slow connection time (63 percent), followed by accessibility issues (50 percent) and security (36 percent). These expectations are sure to follow them to the workforce.

The irony of the disconnect that exists on college campuses between students and IT professionals who work hard to keep up with Wi-Fi demand are not lost on us at all. Students continue to blame the network for slowdowns while doing their homework when in fact the source of their frustration can be their fellow classmates who are watching shows on Netflix or listening to their favorite music on Spotify. This mirrors the current organizational bandwidth issue closely.

The Ipswitch survey also revealed that only 23 percent of respondents were aware of any type of BYOD policy that existed on campus. This again highlights the fact that future coworkers are establishing patterns of behavior that will carry over into the workforce and have the potential to negatively impact organizational productivity. It also makes the point that policies may do little to curb their use of these devices.

The vast majority of students polled use their wireless devices for coursework (94 percent), with more than half (60 percent) spending 1-3 hours day doing so. Only one-third of all students polled (33 percent) spend 1-3 hours a day doing homework via their wireless devices, while half (51 percent) spend the same amount of time chatting, texting or entertaining themselves. More than three-fifths (63 percent) of students polled spend 1-4 hours a day streaming media using services like Spotify, Netflix and YouTube. More than one-third (35 percent) of students indicated that they spend an average of 1 – 2 hours a day streaming media over their campus wireless networks while 28 percent of them admitted to spending 2-4 hours a day doing so. This phenomenon is certainly nothing new to the enterprise IT manager as bandwidth hoarders focused on everything but work exist in every organization. However, this data also indicates that the problem is likely only going to get worse moving forward.

Most Students Don't Get the "D" in BYOD

One of the more entertaining aspects of the survey is that despite how connected every student seems to be and no matter how much time they spend hoarding bandwidth on personal devices, none of them seem to be tuned into the technical nature of the problem. Nearly three-fourths of all students polled (73 percent) did not know what the "D" stood for in BYOD. More than one-third thought the "D" in BYOD stood for "dinner" while one-third thought it meant "date". Only one out of five students (27 percent) correctly identified the term.

Albert Einstein famously said, "I never think of the future - it comes soon enough." While the future is coming at us quickly, it would be a mistake to not start thinking about it today. The future workforce is more connected than ever, create a larger drain on the network than ever before and will have the highest levels of expectations for performance. If Einstein had ever met a college kid with a smartphone, he may have felt differently. 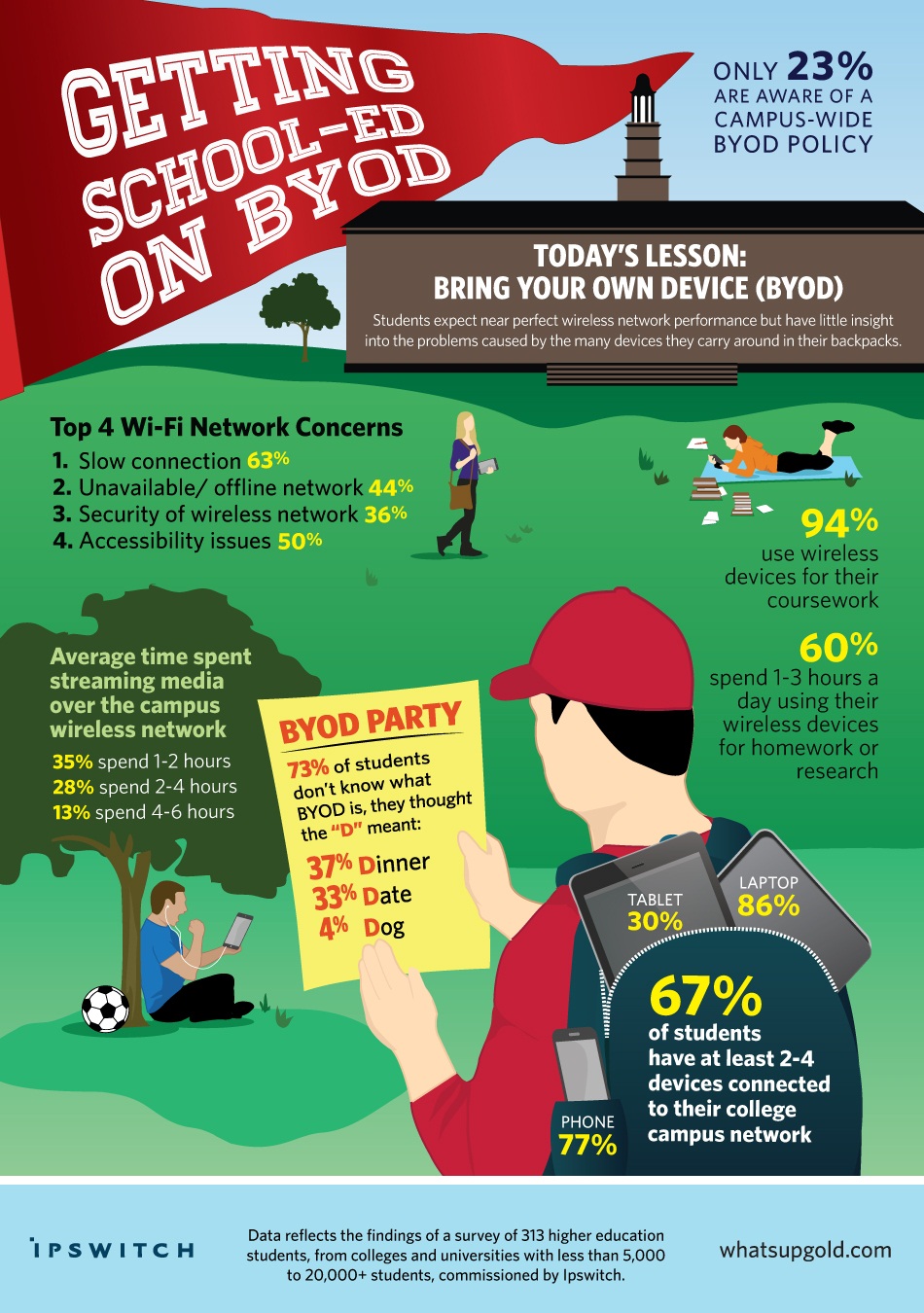