AIOps Virtual Conference
AIOps: Accelerate Incident Resolution with Root Cause Analysis and Contextual Insights
AIOps: Accelerate IT Transformation with Asset Intelligence
Talking AIOPs with CloudFabrix CEO
Dogfooding: How Splunk Uses Its Own APM to Accelerate MTTR
Fireside Chat: The Future of Observability
Simplifying Multicloud with Splunk and Google Cloud's Anthos
Who's Who in IT Incident Management
Ask An Expert: What it Takes to Achieve Modern Infrastructure Monitoring
Harness the Power of AIOps
The IT Ops Virtual Summit
The Next Normal: Can We Be Remote and Productive Forever?
DevOps & Observability Best Practices
Moogsoft Enterprise 8.0 Live - The Virtual NOC is Here!
Fireside Chat: How AIOps Delivers Business Benefits
Who’s Who in IT Incident Management: The Incident Commander
Fireside Chat: Use Cases and Deployment Tips for AIOps with Observability
IT Ops Demystified: Event Chaos or Enrichment?
Moogsoft Express Live - The AIOps & Observability Solution for Cloud-First Companies is Here
An Overview of Roles in Incident Management
IT Ops Demystified: Can Observability Improve IT Ops?
DevOps Open Source Insights and Innovations - Splunk Virtual Event
Future-Proof Your Applications with a Redefined APM Approach
How to Ensure the Performance of Your Cloud-Native Apps
The Future of APM: Bigger, Smarter, More Integrated
Do Legacy Root Cause Analysis (RCA) Techniques Still Work for Modern, Fast-Moving IT?
Can AIOps Reduce the Noise?
Make the Most of Your APM/NPM Tools with AIOps
Autonomous or Bust - What Is The Future of IT Operations?
Can AIOps Cure Your Service Desk Problems?

A widening gap between IT resources and the demands of managing the increasing scale and complexity of enterprise cloud ecosystems is evident, according to Top challenges for CIOs on the road to the AI-driven autonomous cloud, a new report based on a global survey of 800 CIOs conducted by Vanson Bourne and commissioned by Dynatrace.

According to the report, IT leaders around the world are concerned about their ability to support the business effectively, as traditional monitoring solutions and custom-built approaches drown their teams in data and alerts that offer more questions than answers.

Operations teams receive nearly 3,000 alerts from their monitoring and management tools each day

CIO responses in the research indicate that, on average, IT and cloud operations teams receive nearly 3,000 alerts from their monitoring and management tools each day. With such a high volume of alerts, the average IT team spends 15% of its total available time trying to identify which alerts need to be focused on and which are irrelevant. This costs organizations an average of $1.5 million in overhead expense each year. As a result, CIOs are increasingly looking to AI and automation as they seek to maintain control and close the gap between constrained IT resources and the rising scale and complexity of the enterprise cloud.

Too Many Alerts, Not Enough Relevant Information

Traditional monitoring tools were not designed to handle the volume, velocity and variety of data generated by applications running in dynamic, web-scale enterprise clouds. These tools are often siloed and lack the broader context of events taking place across the entire technology stack. As a result, they bombard IT and cloud operations teams with hundreds, if not thousands, of alerts every day. IT is drowning in data as incremental improvements to monitoring tools fail to make a difference.

■ On average, IT and cloud operations teams receive 2,973 alerts from their monitoring and management tools each day, a 19% increase in the last 12 months.

■ 70% of CIOs say their organization is struggling to cope with the number of alerts from monitoring and management tools.

■ 75% of organizations say most of the alerts from monitoring and management tools are irrelevant.

■ On average, just 26% of the alerts organizations receive each day require action.

Traditional monitoring tools only provide data on a narrow selection of components from the technology stack. This forces IT teams to manually integrate and correlate alerts to filter out duplicates and false positives before manually identifying the underlying root cause of issues. As a result, IT teams’ ability to support the business and customers are greatly reduced as they’re faced with more questions than answers.

■ On average, IT teams spend 15% of their time trying to identify which alerts they need to focus on, and which are irrelevant.

■ The time IT teams spend trying to identify which alerts need to be focused on and which are irrelevant costs organizations, on average, $1,530,000 each year.

■ The excessive volume of alerts causes 70% of IT teams to experience problems that should have been prevented.

■ 21 incidents, on average, are experienced by organizations each year that could have been prevented if alerts were seen or acted upon in time.

■ 79% of organizations say the volume of alerts, and the time required to sift through them to identify relevant results, is making it difficult to automate enterprise cloud operations. 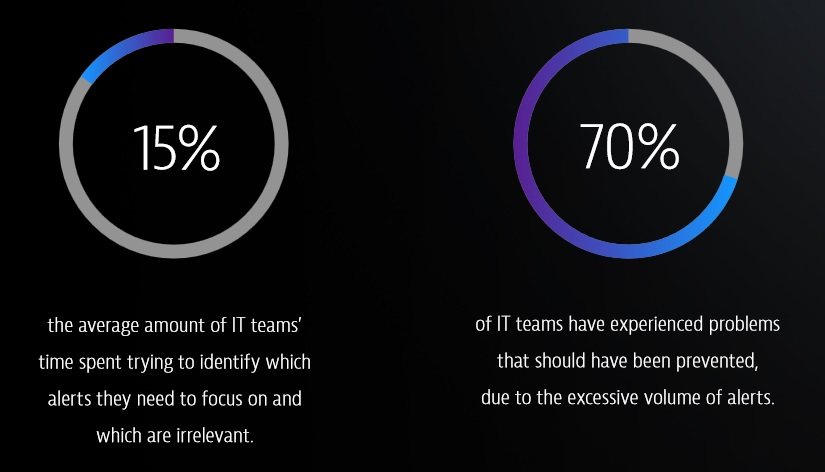 Methodology: This report is based on a global survey of 800 CIOs in large enterprises with over 1,000 employees, conducted by Vanson Bourne and commissioned by Dynatrace. The sample included 200 respondents in the US, 100 in the UK, France, Germany and China, and 50 in Australia, Singapore, Brazil and Mexico.

Following up the list of Application Performance Management Predictions, APMdigest also asked IT industry experts for their 2021 cloud predictions. Part 2 covers a variety of cloud issues ...

What is AIOps? A Next-Gen DevOps Perspective
January 19, 2021
Given the limitations of the existing IT solutions to manage data, enterprises are leveraging AIOps to undertake a host of activities. These include understanding and predicting customer behavior, detecting anomalies and determining their reasons, and offering prescriptive advice. It helps to detect dependencies responsible for creating issues in an IT infrastructure. Also, with AI having features such as containerization, continuous monitoring, predictive or adaptive cloud management, enterprises can gain a next-gen perspective on their business ...
Continual Modernization Programs Are Key to IT Success
January 14, 2021

Modernization projects using an incremental and continuous improvement model achieve superior results when compared to other project-based approaches including the ripping and replacing of core business applications, according to the CHAOS2020 Report from Micro Focus and Standish Group ...

Why Network Change Initiatives Must be Data-Driven
January 13, 2021

Enterprise IT infrastructure never ceases to evolve, as companies continually re-examine and reimagine the network to incorporate new technology advancements and meet changing business requirements. But network change initiatives can be costly and time-consuming without a proactive approach to ensuring the right data is available to drive your initiatives ...