As organizations look for ways to bring their costs down, increase efficiencies and drive agility, they are increasingly looking to Converged Infrastructure as the preferred consumption model for their IT infrastructure. By bundling various components – computing, storage and network – into pre-engineered and pre-integrated solutions, vendors such as HP and IBM and Cisco UCS partners VCE and NetApp are delivering ready to deploy infrastructure stacks. Acquiring companies, if they so desire, can quickly convert these stacks into private clouds to deliver rapid provisioning and elastic scalability to their environment.

Zenoss recently released the findings of their second annual The State of Converged Infrastructure conducted during Q2 of 2014. The survey findings, pulled from the responses of 183 IT professionals from North American and multi-national organizations, explored how technology leaders are using or planning on using Converged Infrastructure (CI) solutions. The survey also highlights CI’s progression and year-to-year changes.

The results were promising for CI overall. Adoption is growing rapidly, with just under half the respondents reporting their CI stack is already in place, and another 44 percent reporting they are in the process of evaluating it. To clarify, the rapid adoption of CIs is not entirely unexpected – according to IDC, the overall spending on converged infrastructure is expected to grow to $17.8 billion by 2016 from a base of $2 billion in 2011.

What is interesting, however — and bodes well for the future of CI — is the fact that it is delivering tangible value to users. In fact, 75 percent of the organizations using Converged Infrastructure reported improved customer satisfaction and another 78 percent reported improved productivity of their IT staff.

Furthermore, the adoption itself appears to be quite widespread. Unlike the classic technology adoption pattern where technology companies take the lead with adoption, CI is gaining ground in adoption rates within the finance industry, and atypical early-adopters in the education vertical, also appear to be very interested in this new consumption model.

Here are some key highlights from the Zenoss study:

Many Plan on Building Their Own Converged Infrastructure, But Not Many Do

Despite the perceived complexity, early adopters of Converged Infrastructure report improved productivity within the datacenter, with over 78 percent pointing to a faster mean time to resolution (MTTR) versus the 2 percent who reported that MTTR times got worse. Also, three out of four companies currently using converged infrastructure report delivering better customer service, while less than 2 percent claimed customer service value declined after deploying converged infrastructure.

IT Teams Still Not Reducing Complexity with Monitoring Tools

IT teams are taking a big step forward by upgrading their IT infrastructure with state-of-the-art technology stacks, yet they are not doing the same with their monitoring tools. In fact, over 55 percent of respondents were using four or more tools to manage the availability and performance of their converged infrastructure, with 29 percent juggling more than seven tools. This is a huge miss on the part of IT organizations.

Study after study shows that having too many tools can slow down root-cause analysis, increase management overhead, and reduce overall IT Operations productivity. This is crucial. Having the proper tools in place for unified monitoring will ensure that converged infrastructure can deliver on its value.

The value driven by Converged Infrastructure appears to be offsetting concerns around vendor lock-in and companies are willingly adopting a single-vendor stack over a best-of-breed custom-built environment. Those that have already adopted converged infrastructure are benefiting from better customer service, improved MTTR, and increased agility and speed. As for the naysayers – their current systems are adequate for now, but when a technology upgrade/refresh cycle occurs, there is a good possibility that Converged Infrastructure will be part of their consideration set.

Scott Hollis is Director of Product Marketing for Zenoss. 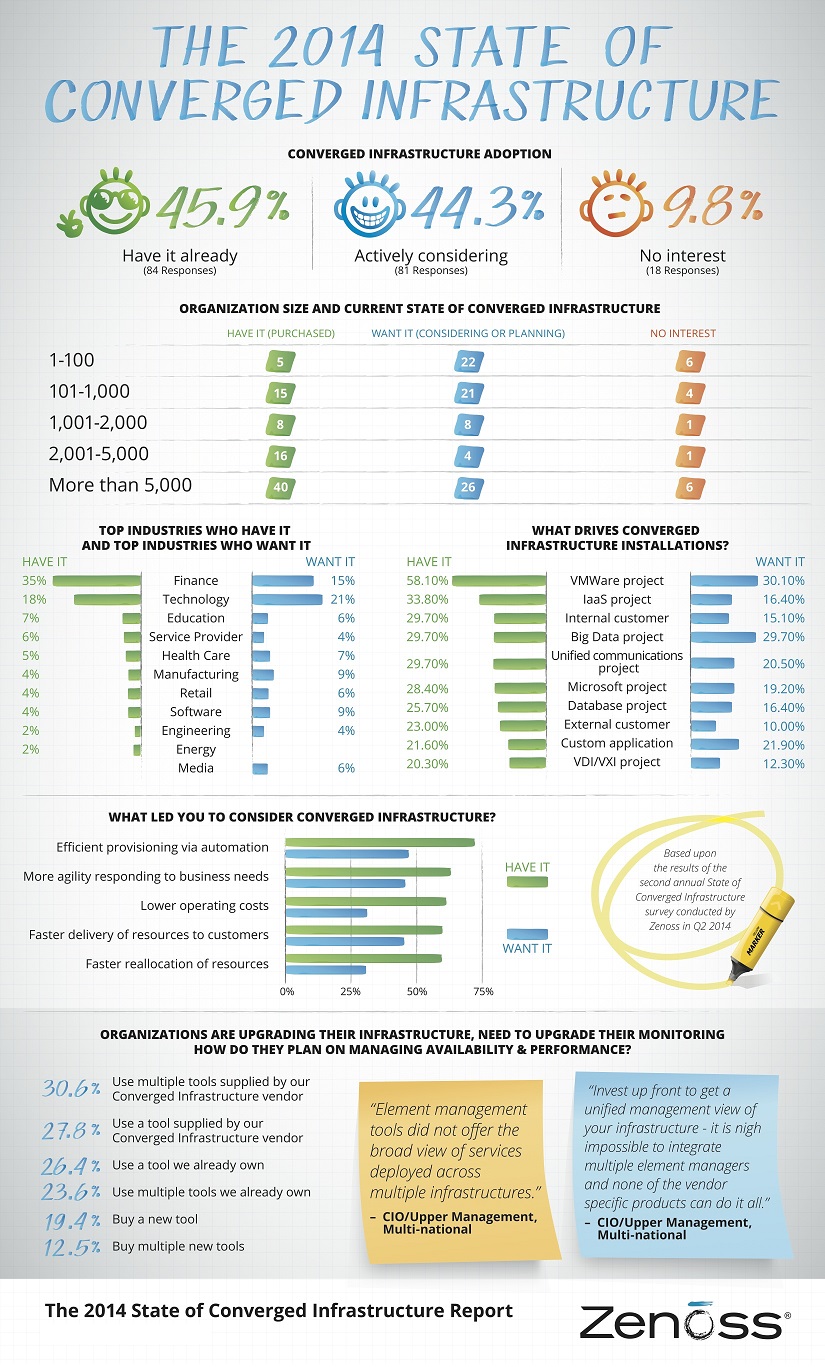