Splunk Executive and Emerging Technology Predictions 2022
APIs in Action
How to Optimize Digital Experience with Service-Level Objectives
The State of Observability 2021
The 2021 Kubernetes & Big Data Report
Improve Performance with Real Insight Into How Queries are Executing
Spark on Hadoop: A Quick Guide
Big Data Cloud Technology Report 2021
Infrastructure Monitoring 101: The Power to Predict and Prevent
The 5 Foundational DevOps Practices
Get Your Cloud & Hybrid Migration Strategy Right in Government
Scalability in Cloud Computing
AI and Machine Learning in Your Organization
Making Sense of Digital Experience Monitoring Solutions
APIs in Action: A Guide to Monitoring APIs for Performance
Six Cloud Strategy Pitfalls and How to Avoid Them
5 Things to Consider When Choosing an APM Tool
The Guide to Modern APM
Splunk Predictions 2021: Executive Report
Fast-Track Your Multicloud Monitoring Initiative
The Essential Guide to Container Monitoring
The Data Age Is Here. Are You Ready?
CIO Dive: How AIOps Cuts Costly Downtime and Supports Teams
Autonomous Operations: How to Intelligently Automate and Scale IT Operations at Global Enterprises
AIOps Brings Calm to Overwhelmed IT Ops Teams
Can AIOps Reduce the Noise?

Very often, when an enterprise starts on the virtual desktop journey, the focus is on the user desktop. This is only natural - after all, it is the desktop that is moving - from being on a physical system to a virtual machine.

Therefore, once a decision to try out VDI is made, the primary focus is to benchmark the performance of physical desktops, model their usage, predict the virtualized user experience and based on the results, determine which desktops can be virtualized and which can't. This is what many people refer to as “VDI assessment”.

One of the fundamental changes with VDI is that the desktops no longer have dedicated resources. They share the resources of the physical machine on which they are hosted and they may even be using a common storage subsystem.

While resource sharing provides several benefits, it also introduces new complications. A single malfunctioning desktop can take so much resources that it impacts the performance of all the other desktops. Whereas in the physical world, the impact of a failure or a slowdown was minimal (if a physical desktop failed, it would impact only one user), the impact of failure or slowdown in the virtual world is much more severe (one failure can impact hundreds of desktops). Therefore, even in the VDI assessment phase, it is important to take performance considerations into account.

In fact, performance has to be considered at every stage of the VDI lifecycle because it is fundamental to the success or failure of the VDI rollout. The new types of inter-desktop dependencies that exist in VDI have to be accounted for at every stage.

For example, in many of the early VDI deployments, administrators found that when they just migrated the physical desktops to VDI, backups or antivirus software became a problem. These software components were scheduled to run at the same time on all the desktops. When the desktops were physical, it didn’t matter, because each desktop had dedicated hardware. With VDI, the synchronized demand for resources from all the desktops severely impacted the performance of the virtual desktops. This was not something that was anticipated because the focus of most designs and plans was on the individual desktops. 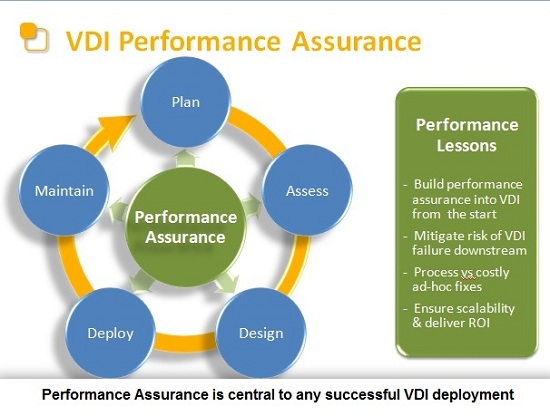 Understanding the performance requirements of desktops may also help plan the virtual desktop infrastructure more efficiently. For example, known heavy CPU using desktop users can be load balanced across servers. Likewise, by planning to assign a good mix of CPU intensive and memory intensive user desktops are assigned to a physical server, it is possible to get optimal usage of the existing hardware resources.

Taking this discussion one step further, it is interesting to draw a parallel with how server virtualization evolved and to see what lessons we can learn as far as VDI is concerned.

VDI deployments could be done more rapidly and more successfully if we learn our lessons from how server virtualization evolved. VDI assessment needs to expand in focus on just the desktop and look at the entire infrastructure. Attention during VDI rollouts has to be paid to performance management and assurance. To avoid a lot of rework and problem remediation down the line, performance assurance must be considered early on in the process and at every stage. This is key to getting VDI deployed on a bigger scale and faster, with great return on investment (ROI).

The Holiday Season means it is time for APMdigest's annual list of Application Performance Management (APM) predictions, the most popular content on APMdigest, viewed by tens of thousands of people in the IT community around the world for more than a decade. Industry experts offer thoughtful, insightful, and often controversial predictions on how APM, AIOps, Observability, Open Telemetry, and related technologies will evolve and impact business in 2022 ...

As organizations strive to advance digital acceleration efforts, outpace competitors, and better service customers, the path to better, more secure software lies in AIOps. As DevOps teams continue to adopt progressive delivery models and the volume of production deployments and configuration changes sees even more growth, here are a few of the things that your DevOps teams should keep in mind, as they look to make the most of their IT toolkits via AIOps ...

In the old days of monolithic architectures, IT operations teams could manage service-disrupting incidents themselves. But these architectures have evolved, and the systems our digital economy relies on today are too complex and produce too much data for human operators to monitor, let alone fix. Artificial Intelligence for IT Operations (AIOps) solutions automate system monitoring and remediation strategies to help DevOps and SRE teams ensure that services and apps are continuously available ...

As global and emerging technology trends continue to drive the network to evolve at an accelerated pace, we wanted to better understand the current trends and challenges these teams face. As a result, LiveAction conducted a survey of networking professionals that on average manage more than 500 networking devices at organizations with more than 600 employees. Let's dive into four of the key insights revealed in this report ...

Thanks to pandemic-related work-from-home (WFH) and digital/mobile customer experience initiatives, employees and users are more distributed than ever. At the same time, organizations everywhere are adopting a cloud-first or cloud-smart architecture, distributing their business applications across private and public cloud infrastructures. Private data centers continue to be consolidated, while more and more branch offices are connecting to data centers and the public cloud simultaneously. Maintaining application performance for distributed users in this increasingly hybrid environment is a significant challenge for IT teams ...

In a world where constant change is becoming routine, Gartner said that infrastructure and operations (I&O) leaders must shift their traditional focus from efficiency to one of adaptive resilience. I&O leaders must re-imagine how they manage their talent, their platforms and operations, if they want to dynamically and quickly exploit new opportunities ...

"Shop ‘Til You Drop" Could Take on New Meaning in Online Black Friday Sales
November 23, 2021

The holidays are almost upon us, and retailers are preparing well in advance for the onslaught of online consumers during this compressed period. The Friday following Thanksgiving Day has become the busiest shopping day of the year, and online shopping has never been more robust. But with supply chain disruptions limiting merchandise availability, customer experience will make the difference between clicking the purchase button or typing a competitor's web address ...

Is Your Business Ready for API Tuesday?
November 22, 2021

The 2021 holiday season will be an inflection point: As the economy starts to ramp up again while the country still grapples with the pandemic, holiday shopping will be the most digital holiday season in history by a long shot ... The work must begin months before, as organizations learn from the year prior and take steps to improve experiences and operations, fine-tune systems, plug in new data sources to enrich machine-learning algorithms, move more workloads to the cloud, automate, and experiment with new tech. These efforts culminate in "API Tuesday" ...

The Future of Work Will Remain Hybrid
November 18, 2021

Most (83%) of nearly 1,500 business and IT decision makers believe that at least 25% of their workforce will remain hybrid post-pandemic, according to the Riverbed | Aternity Hybrid Work Global Survey 2021. While all indicators signal hybrid work environments are the future, most organizations are not fully prepared to deliver a seamless hybrid work experience ...

Investing, Innovating, and Integrating the Mainframe: A Strategy for Success
November 17, 2021

The results of the 2021 BMC Mainframe Survey highlight the consistent positive growth outlook as seen in recent years, with 92 percent of respondents viewing the mainframe as a platform for long-term growth and new workloads, and 86 percent of extra-large shops expecting MIPS (millions of instructions per second) to grow in the coming year. This is not surprising, considering the disruptive nature of the modern digital economy ...