APIs in Action
How to Correctly Frame and Calculate Latency SLOs
How to Optimize Digital Experience with Service-Level Objectives
The State of Observability 2021
The 2021 Kubernetes & Big Data Report
Improve Performance with Real Insight Into How Queries are Executing
Spark on Hadoop: A Quick Guide
Big Data Cloud Technology Report 2021
Infrastructure Monitoring 101: The Power to Predict and Prevent
The 5 Foundational DevOps Practices
Get Your Cloud & Hybrid Migration Strategy Right in Government
Scalability in Cloud Computing
AI and Machine Learning in Your Organization
Making Sense of Digital Experience Monitoring Solutions
APIs in Action: A Guide to Monitoring APIs for Performance
Six Cloud Strategy Pitfalls and How to Avoid Them
5 Things to Consider When Choosing an APM Tool
The Guide to Modern APM
Splunk Predictions 2021: Executive Report
Fast-Track Your Multicloud Monitoring Initiative
The Essential Guide to Container Monitoring
The Data Age Is Here. Are You Ready?
CIO Dive: How AIOps Cuts Costly Downtime and Supports Teams
Autonomous Operations: How to Intelligently Automate and Scale IT Operations at Global Enterprises
AIOps Brings Calm to Overwhelmed IT Ops Teams
Can AIOps Reduce the Noise?

Digital technologies have enveloped our lives like never before. Be it on the personal or professional front, we have become dependent on the accurate functioning of digital devices and the software running them. To cite a few examples to drive home the point – imagine going to an unknown city and depending on the GPS for guidance, using your digital wallet to make a payment, booking a movie or airlines ticket, or checking the balance of your bank account. Now imagine these activities coming to a standstill because the software running them has glitches. Hence, the performance of the software is critical in running the components and levers of the new digital ecosystem. And to ensure our digital ecosystem delivers the required outcomes, a robust performance testing strategy should be instituted. 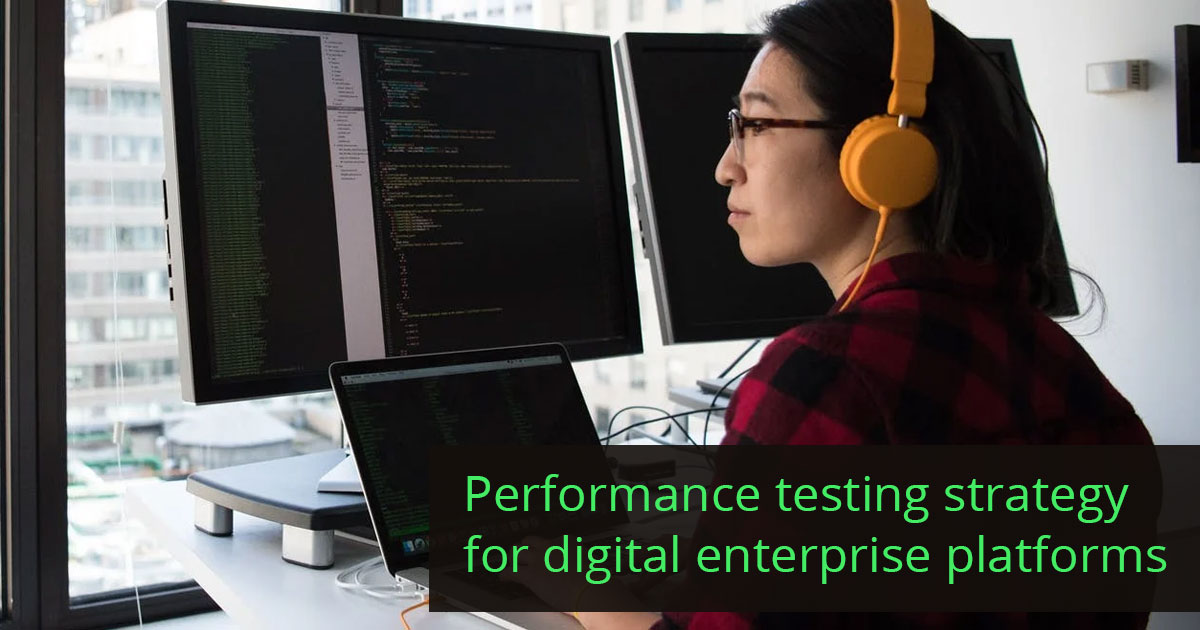 What is Performance Testing?

It is about evaluating the performance of a system in terms of parameters like responsiveness and stability when the system is subjected to a specific load. Any application performance testing exercise checks for speed, reliability, robustness, and the size of the application. The performance indicators taken into consideration are:

■ Type and frequency of errors or glitches encountered in the system.

Why Should the Performance of a System Be Tested?

Any system should be expected to deliver a superior user experience irrespective of the level of traffic it encounters. It should ideally meet the expected outcomes conceived at the time of its design. The performance of a system is critical to its adoption and success in the market, especially when the end-customers are flooded with new choices. Of late, the digital ecosystem is bursting at the seams with companies or app developers releasing new software systems at the drop of the hat. However, not every such software is lapped up by the end-customers.

Their success is predominantly underpinned on factors like performance, cost, security, usability, reliability, and stability. Also, there are times when a system is subjected to excessive load, say like the Black Friday sales. During such times, the system can be overwhelmed leading to its malfunctioning or even crashing. To prevent such a situation and to find out the threshold up to which the system can deliver outcomes consistently and of acceptable quality, a proper performance testing strategy should be drawn.

Further, in the absence of application performance testing, the responsiveness of a system during load times will remain under a cloud. This can be detrimental to the bottom line of organizations as bad user experiences can lead people to leave the application altogether. Also, in a broader perspective, the well-being of people can be at stake. For example, a healthcare management system can come under stress in situations of emergencies when prompt response is needed.

What Are the Benefits of Performance Testing?

By incorporating a robust performance testing approach in the SDLC, organizations can achieve the below-mentioned benefits.

■ Identifies the vulnerabilities or glitches in the system that make the latter work less efficiently.

■ Validates the features and functionalities of the software.

■ Enhances the capability of the system to handle the load.

■ Measures the stability, throughput, responsiveness, accuracy, and speed of the software.

What Are the Different Types of Performance Testing?

The key testing types are related to load, unit, spike, soak, and stress.

■ Load testing is about simulating the number of virtual users and then check the application's response time. It helps to identify the resident glitches or bottlenecks preventing the application to perform to its optimum.

■ Unit testing is about simulating the transactional activity to identify and isolate transactions that could disrupt the functioning of the application.

■ Stress testing is about evaluating application behavior when subjected to peak loads.

■ Spike testing is about studying the operation of systems when the load activity is above average.

What Should Be the Right Performance Testing Strategy?

It is only by taking the right performance testing approach that a system can generate the expected outcomes even when subjected to excessive loads.

■ Test early and test often to identify and fix glitches early in the development phase.

■ Follow the DevOps route of integrating the development and operations functions and incorporating performance engineering into the value chain.

■ Not only should the response of the servers be tested when subjected to excessive levels of load but focus on the actual users as well. Performance testing should be driven from the perspective of a single user to understand his or her experience.

■ Build a performance model to understand the system's capacity. It will help to plan the state related to concurrent users, simultaneous requests, server utilization, system throughput, and average user sessions. The model should define the KPIs, average latency, system throughput, CPU usage, network traffic, and hardware metrics, among others.

■ Define baseline performance measurements to choose the right testing goals concerning each environment. These can include the user login time and system response time, among others.

■ The testing should generate accurate reports to analyze the behavior of the system. The reports and data can help testers to pinpoint the causes of system malfunction during excessive load sessions.

Testing the performance of a system is important to ensure its eventual adoption and success in the market. It lets developers and testers to understand the load thresholds beyond which the system may not respond along expected lines. The information can help to fix the system's architecture and enhance its output.

Better Connections Required for the Future of Work
September 23, 2021

The Internet played a greater role than ever in supporting enterprise productivity over the past year-plus, as newly remote workers logged onto the job via residential links that, it turns out, left much to be desired in terms of enabling work ...

The world's appetite for cloud services has increased but now, more than 18 months since the beginning of the pandemic, organizations are assessing their cloud spend and trying to better understand the IT investments that were made under pressure. This is a huge challenge in and of itself, with the added complexity of embracing hybrid work ...

After a year of unprecedented challenges and change, tech pros responding to this year’s survey, IT Pro Day 2021 survey: Bring IT On from SolarWinds, report a positive perception of their roles and say they look forward to what lies ahead ...

Why Incident Triage is a Key Element in Your MTTR
September 20, 2021

One of the key performance indicators for IT Ops is MTTR (Mean-Time-To-Resolution). MTTR essentially measures the length of your incident management lifecycle: from detection; through assignment, triage and investigation; to remediation and resolution. IT Ops teams strive to shorten their incident management lifecycle and lower their MTTR, to meet their SLAs and maintain healthy infrastructures and services. But that's often easier said than done, with incident triage being a key factor in that challenge ...

Achieve more with less. How many of you feel that pressure — or, even worse, hear those words — trickle down from leadership? The reality is that overworked and under-resourced IT departments will only lead to chronic errors, missed deadlines and service assurance failures. After all, we're only human. So what are overburdened IT departments to do? Reduce the human factor. In a word: automate ...