DPI: The Key Technology for Application Performance Monitoring Solutions
Splunk Momentum: Infrastructure
Managing Big Data Analytics in the Cloud–Are You Ready?
The Future of Big Data: A Perspective from IT Leaders Transforming IT Ops
Controlling Cost and Complexity in the Cloud with Managed Autoscaling
Forrester Webinar: Work Anywhere - Ensuring Superior Digital Experiences with Synthetics AND Real User Monitoring
Optimize Spark Performance on Kubernetes
Best Practices for Spark Performance Management
Scaling Kubernetes with Splunk and AWS
Simplify Kubernetes Performance Management with End-to-End Visibility
12 Immutable Rules for Observability
Intelligent Observability for SREs
RESOLVE '21 Virtual Conference
2021 IT Ops Predictions
Taking the Risk Out of Innovation - How to Move Fast Without Breaking
Intelligent Observability for ITOps
Did Things Get Tougher for IT Ops in the Past 6 Months?
How Expedia Modernized Operations on One of the World's Fastest-Moving IT Stacks
Intelligent Observability for DevOps
Datadog Expands Your Monitoring Reach with Moogsoft Observability Cloud
AIOps Virtual Conference
Unifying IT with Outcome-Aware AIOps Featuring Dennis Drogseth, VP, EMA
Fireside Chat on AIOps Trends and Challenges with Rich Lane, Sr. Analyst, Forrester
AIOps: How to Reduce IT Ticket Volume Using AI-Driven Event Correlation and Alert Noise Reduction
AIOps: Accelerate Incident Resolution with Root Cause Analysis and Contextual Insights
AIOps: Accelerate IT Transformation with Asset Intelligence
Talking AIOPs with CloudFabrix CEO
Dogfooding: How Splunk Uses Its Own APM to Accelerate MTTR
Fireside Chat: The Future of Observability
Simplifying Multicloud with Splunk and Google Cloud's Anthos

The 2021 Kubernetes & Big Data Report
Digital Experience Monitoring in the Era of Cloud and SaaS and the Need for DPI Intelligence
DPI for Application Performance Monitoring
Improve Performance with Real Insight Into How Queries are Executing
Spark on Hadoop: A Quick Guide
Big Data Cloud Technology Report 2021
Infrastructure Monitoring 101: The Power to Predict and Prevent
The 5 Foundational DevOps Practices
Get Your Cloud & Hybrid Migration Strategy Right in Government
Scalability in Cloud Computing
AI and Machine Learning in Your Organization
Making Sense of Digital Experience Monitoring Solutions
APIs in Action: A Guide to Monitoring APIs for Performance
Six Cloud Strategy Pitfalls and How to Avoid Them
Maximize IT Investment with CloudReady
Troubleshooting Microsoft 365 End-to-End
19 Key Areas Shaping IT Performance Markets in 2020
5 Things to Consider When Choosing an APM Tool
The Guide to Modern APM
Splunk Predictions 2021: Executive Report
How to Monitor Zoom Audio Video Conferencing
The Power of the Crowd
Fast-Track Your Multicloud Monitoring Initiative
SaaS Monitoring Best Practices
The Essential Guide to Container Monitoring
The Data Age Is Here. Are You Ready?
AIOps Evaluator's Guide
AIOps Gets Real
Observability with AIOps For Dummies
CIO Dive: How AIOps Cuts Costly Downtime and Supports Teams

Internet users are growing more demanding and less forgiving, according to the results of a consumer survey from Apica.

In a clear call to action for organizations around the world, Apica’s survey found that three quarters of respondents expect websites and apps to perform faster than they did three years ago.

Nearly 40 percent won’t wait more than ten seconds for a website to respond before navigating away.

Apica conducted the survey among internet users in the UK, US and Sweden, to investigate changing attitudes towards a brand’s digital performance. The survey of 2,250 consumers reveals that nearly 40 percent won’t wait more than ten seconds for a website to respond before navigating away. One in nine users (11 percent) won’t even give a site five seconds before moving onto another website.

The survey also found that digital disappointment affects brand loyalty, with 60 percent of consumers likely to be less loyal towards a brand if they experience poor website or app performance. Ten percent of participants said they would never return to an offending brand for goods or services. Swedes are least loyal towards a brand that lets them down online, with 73 percent likely to turn to competitors.

Carmen Carey, CEO, Apica, said, “These results demonstrate that digital consumers have limited patience for slow performance or delays. There is clearly a general expectation that sites and apps will perform faster and better, particularly with the advent of born digital organizations. The onus is now on businesses, whether they’re a leading financial company or an online retailer, to ensure peak performance at all times.”

The survey also revealed that users also have limited patience for organizations that schedule maintenance on websites and apps. Less than half (46 percent) of users said that several hours of downtime was acceptable, and even then, reasons for the downtime had to be properly communicated. 54 percent respondents had an "upper limit" of one hour, and more than 1/10 (13 percent) actually expect 100 percent uptime.

Negative digital experiences are also likely to impact brand reputation with 83 percent of global respondents reporting they would consider telling colleagues about a poor website or app experience, and almost 4 in 10 would definitely share this.

“If companies wish to retain both customers and revenue, they must focus on proactive performance testing and monitoring of their digital services to ensure that, even at peak times, downtime does not occur,” added Carmen.

Read How Insufficient API Testing Can Impact Your End Users 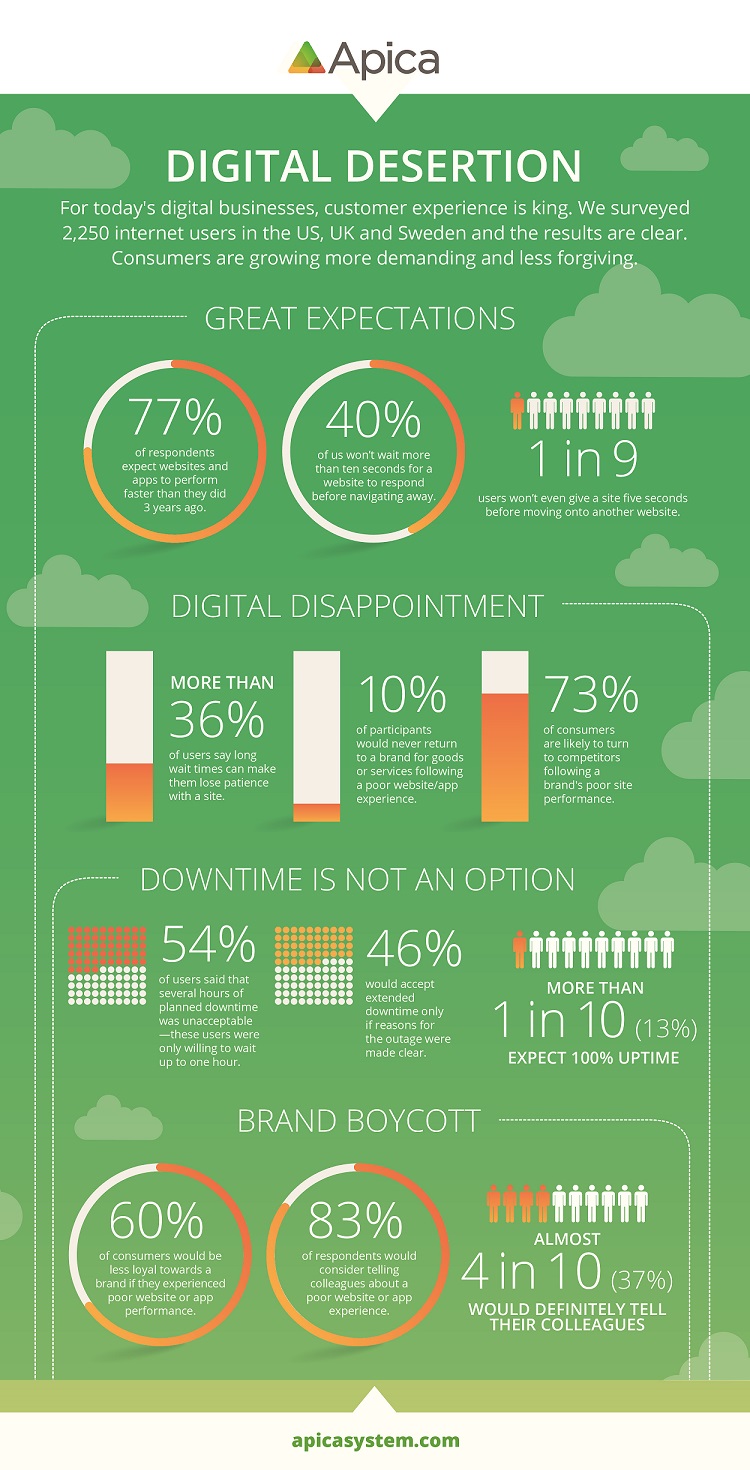 Apica monitors ecommerce websites and publishes an annual Black Friday Web Performance Index. Last year, it revealed that whist the top ten eCommerce websites are healthy, the rest are lagging expectations. The 2017 index is due to be published late November after Black Friday and Cyber Monday.

Sven Hammar is Chief Strategy Officer and Founder of Apica

www.apicasystems.com
How Insufficient API Testing Can Impact Your End Users