Future-Proof Your Applications with a Redefined APM Approach
How to Ensure the Performance of Your Cloud-Native Apps
The Future of APM: Bigger, Smarter, More Integrated
Do Legacy Root Cause Analysis (RCA) Techniques Still Work for Modern, Fast-Moving IT?
Can AIOps Reduce the Noise?
Make the Most of Your APM/NPM Tools with AIOps
Autonomous or Bust - What Is The Future of IT Operations?
Can AIOps Cure Your Service Desk Problems?
Assuring Performance in Hybrid Cloud Ecosystems | QOS and User Experience in the Digital Age
How to Deliver Exceptional End User Experience in Your Citrix Environment
How to Ensure High-Performing Microsoft .NET Applications
Four Best Practices for Delivering Exceptional User Experience in VMware Horizon VDI Environments

This summer marked three years since Microsoft announced Windows 10, its first "Windows as a service" Operating System (OS) that, despite its maturity, is still at the center of many heated conversations in the End User Computing (EUC) community. 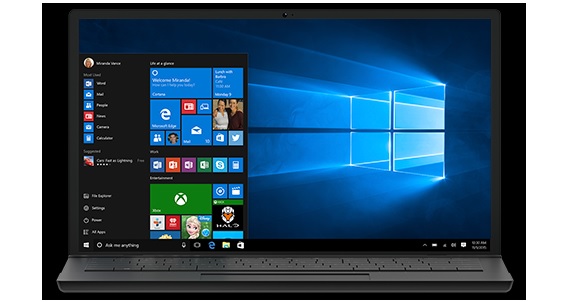 Windows 10 brought with it a new Software-as-a-Service-like approach to updates, moving Microsoft and the millions of environments that depend on it, more frequent, bundled updates. Whether you believe the shift was for better or worse, one thing is certain, this "as a service" model is a natural progression for today's operating systems, evidenced by OSX, Android and iOS, which have predated Microsoft's approach by years. That is why Windows 10 is changing not only how frequently updates are pushed out, but inherently how technology is purchased, how people consume it, and perhaps most importantly, how IT is run.

Let's take a look at how Windows 10 has impacted these three key areas over the past three years:

Both Gartner and IDC have seen a Growth in Hardware Sales

As with any refresh cycle, migrations to Windows 10 have impacted hardware sales. In fact, according to Peter Bright in a recent Ars Technica post, when it comes to Microsoft sales, "the general pattern over the last few quarters is that business sales have been robust even as consumer demand continues to soften."

While this increase may not come as a surprise to most of us in hindsight, refresh cycles can take IT teams by surprise when it comes to the necessary hardware update requirements. When Windows 10 was first introduced, many IT departments did not understand the graphical implications of the new OS, even for non-graphics-heavy users. In fact, in a Lakeside Software analysis of Windows 7 vs Windows 10, it was determined that, "Graphics usage increases 32% from Windows 7 (8.58%) to Windows 10 (11.30%)." And that is not due to any fault of IT's own – this under provisioning or miscalculation of compute resources is due in part to the lack of visibility IT teams have into the hardware (and other) requirements of business-driven refresh cycles.

Windows as a Service (WaaS) has Altered the Employee Experience

With its new servicing structure, Windows 10 has introduced Evergreen IT to the OS. A term first coined by PwC in 2009, Evergreen IT speaks to the benefits IT infrastructure can enjoy from adopting key attributes of cloud computing. In true evergreen fashion, Windows 10 is ever updating, with feature updates twice per year, rather than every 3-5 years previously, and bundled quality updates every month.

Just as the shift to evergreen operating systems has very real implications for IT, employees living and working in this new OS also experience a change and shift in the way they work. While more frequent feature and quality updates mean better patching and more optimized desktops, it may also mean compromised endpoint performance to which users often find workarounds, such as uninstalling updates. In light of this, Microsoft has given users the ability to schedule reboots and has even dabbled in using machine learning to improve user experience, particularly when it comes to reboots.

IT Operations Have and Will Continue to Adapt

Traditionally, IT has taken a reactive stance to supporting users and business-critical resources. Take for instance, the performance implications of the Meltdown and Spectre patches which, after being pushed out, showed noticeable CPU impact on endpoints. Most IT teams had no choice but to be reactive about improving end-user experience in this case.

And I am not suggesting that this reactive stance is due to any fault of IT's own. I argue that it is due to a lack of visibility into how updates and patches may shift the IT landscape. With Windows 10/Evergreen pushing out updates that may or may not impact endpoint performance, it is more critical than ever to understand what the impact of future updates may have on the environment so that, given the update, IT can act accordingly and minimize the impact on end users. This takes a shift in how IT operates — from gathering historical data to making sense of it — in order to predict and proactively act on that data

The Rising Importance of Workspace Analytics

With Microsoft's announcement on ending support for Windows 7 in January of 2020, it is clear that Windows 10 is showing strong growth despite the mix of anticipation and concerns around its servicing structure. And while it is true that Windows 7 is still the most popular version of Windows, projections indicate that the throne will soon be passed on to Windows 10.

Whether you are a part of the group that has migrated over or not, many of the hardships IT teams encounter with managing and working in a Windows 10 environment, including the three areas outlined above, can be lessened my gathering and making sense of endpoint data. This practice is called Workspace Analytics and it is an up-and-coming technology that can help answer the following:

- How ready is my environment for Windows 10 and what hardware/other changes are needed to make the migration successful?

- How can I be proactive about updates that may impact my end-users and how I run my environment?

Are you seeing other areas that are being affected by the migration? As we continue to see the growth of Windows 10 in enterprise IT, monitor the trends in how it is impacting your technology, users and how you run your environment so that you can keep evolving in lockstep with your IT stack.

How to Ensure Flawless Performance of Your e-Commerce Application
July 16, 2020
eCommerce companies have entered into the domain of mobile applications given the huge number of customers using such apps on their smartphones on the go. However, these apps are vulnerable to both performance and security issues. Performance-wise, the apps may slow down while loading or transacting, give erroneous counts, become non-responsive across devices, and many more. So, the need of the hour for enterprises developing such applications is to invest in eCommerce performance testing ...
Why Bother With Digital Experience Monitoring for SaaS Apps? - Part 2
July 15, 2020

Digital Experience Monitoring is a tool that should be integrated with an organization's change management strategy. A key benefit of SaaS/cloud is no longer being responsible for software and hardware upgrades, maintenance, and patch cycles. Migrating to Microsoft Office 365 means no longer spending precious time and resources on Windows, Exchange or SharePoint upgrades for example. But that doesn't mean that IT can ignore changes or doesn't need to monitor for their effects ...

As systems become more complex and IT loses direct control of infrastructure (hello cloud), it becomes both more difficult and more important to capture and observe, holistically, the user experience. SaaS or cloud apps like Salesforce, Microsoft Office 365, and Workday have become mission-critical to most businesses and therefore need to be examined when it comes to experience monitoring ...

Newly distributed operations teams are struggling to cope with the sudden change to the WFH (work from home) concept. IT operations teams were traditionally set up to work from centralized locations, unlike software and engineering teams. Some organizations have overcome that by implementing AIOps solutions; others are using a brute force method of employing more IT operations analysts to keep the distributed NOCs going ...

Enterprises That Stopped IT Cloud Migrations Had 2.5x Outages During Global Pandemic
July 09, 2020

Enterprises that halted their cloud migration journey during the current global pandemic are two and a half times more likely than those that continued their move to the cloud to have experienced IT outages that negatively impacted their SLAs, according to Virtana's latest survey report The Current State of Hybrid Cloud and IT ...

While the adoption of continuous integration (CI) is on the rise, software engineering teams are unable to take a zero-tolerance approach to software failures, costing enterprise organizations billions annually, according to a quantitative study conducted by Undo and a Cambridge Judge Business School MBA project ...