Gartner: Organizations are Slow to Advance in Data and Analytics
February 12, 2018

A worldwide survey by Gartner, Inc. showed that 91 percent of organizations have not yet reached a "transformational" level of maturity in data and analytics, despite this area being a number one investment priority for CIOs in recent years.

"Most organizations should be doing better with data and analytics, given the potential benefits," said Nick Heudecker, Research VP at Gartner. "Organizations at transformational levels of maturity enjoy increased agility, better integration with partners and suppliers, and easier use of advanced predictive and prescriptive forms of analytics. This all translates to competitive advantage and differentiation."

The survey asked respondents to rate their organizations according to Gartner's five levels of maturity for data and analytics (see Figure 1), and found that 60 percent of respondents worldwide rated themselves in the lowest three levels. 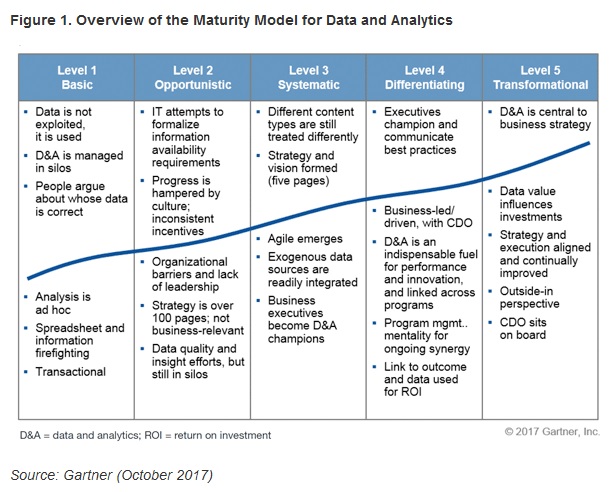 The survey revealed that 48 percent of organizations in Asia Pacific (APAC) reported their data and analytics maturity to be in the top two levels. This compares to 44 percent in North America and just 30 percent in Europe, the Middle East, and Africa (EMEA).

The majority of respondents worldwide assessed themselves at level three (34 percent) or level four (31 percent).

21 percent of respondents were at level two, and 5 percent at the basic level, level one.

Only 9 percent of organizations surveyed reported themselves at the highest level, level five, where the biggest transformational benefits lie.

"Don't assume that acquiring new technology is essential to reach transformational levels of maturity in data and analytics," said Heudecker. "First, focus on improving how people and processes are coordinated inside the organization, and then look at how you enhance your practices with external partners."

The survey also revealed that, despite a lot of attention around advanced forms of analytics, 64 percent of organizations still consider enterprise reporting and dashboards their most business-critical applications for data and analytics. In the same manner, traditional data sources such as transactional data and logs also continue to dominate, although 46 percent of organizations now report using external data.

"It's easy to get carried away with new technologies such as machine learning and artificial intelligence," added Heudecker. "But traditional forms of analytics and business intelligence remain a crucial part of how organizations are run today, and this is unlikely to change in the near future."

Barriers Preventing Increased Use of Data and Analytics

Organizations reported a broad range of barriers that prevent them from increasing their use of data and analytics. There isn't one clear reason; organizations tend to experience a different set of issues depending on their geography and current level of maturity. However, the survey identified the three most common barriers as: defining data and analytics strategy; determining how to get value from projects; and solving risk and governance issues.

"These barriers are consistent with what Gartner hears from client organizations who are at maturity levels two and three," said Jim Hare, Research VP at Gartner. "As organizational maturity improves to enterprise level and beyond, organizational and funding issues tend to rise."

"Where the analytics workloads run is based a lot on where the data is generated and stored. Today, most public cloud workloads are new and we won't see the percentage of cloud use rise until legacy workloads migrate en masse," said Hare. "This scenario will happen eventually, but given the extent to which modern data and analytics efforts overwhelmingly use traditional data types stored on-premise, this shift will likely take several years to complete."

Methodology: The Gartner research was conducted via an online survey in the second quarter of 2017 among Gartner Research Circle members — a Gartner-managed panel composed of IT and business leaders — as well as an external sample source. In total, 196 respondents from EMEA, APAC and North America completed the survey. Respondents spanned 13 vertical industry categories, and revenue categories from "less than $100 million" to "$10 billion or more."