2020 heralded the era of remote working, with companies empowering their employees to work in their homes. Cloud usage skyrocketed, and as Microsoft's CEO said, "We've seen two years' worth of digital transformation in two months."

The world's appetite for cloud services has increased but now, more than 18 months since the beginning of the pandemic, organizations are assessing their cloud spend and trying to better understand the IT investments that were made under pressure. This is a huge challenge in and of itself, with the added complexity of embracing hybrid work. 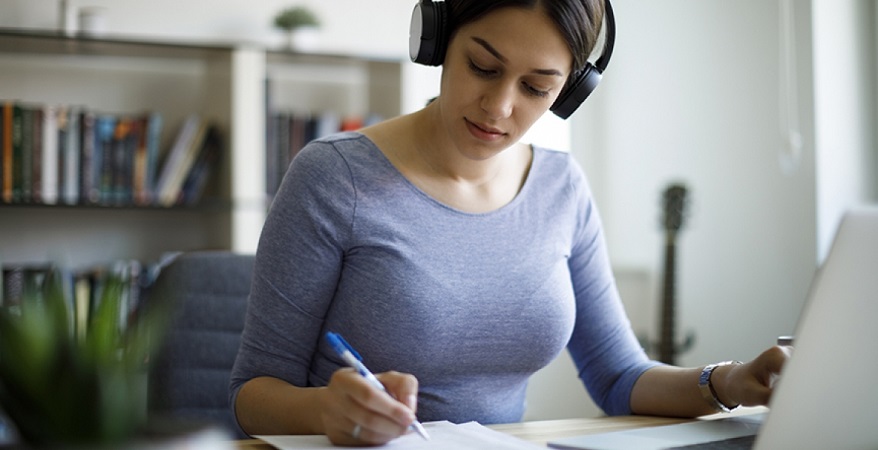 A recent survey from Snow Software polled 400 IT leaders to determine the current state of hybrid work and technologies and found that more than 92% were moving or had already moved to a hybrid work mode. This statistic isn't surprising as many companies — most recently LinkedIn and Amazon — have pushed back their return to office dates due to the Delta variant or adopted a permanent hybrid work approach rather than a full return to office.

While most IT leaders have moved or are already moving to hybrid work, only 34% indicated that the shift to hybrid work is the IT team's primary focus for the next 12 months. Most leaders noted that reducing/optimizing IT costs (55%) and enabling competitive differentiation through IT initiatives (57%) are their main priorities.

This begs the question — if hybrid work is top of mind for organizations, why is it not a top focus for IT leaders? 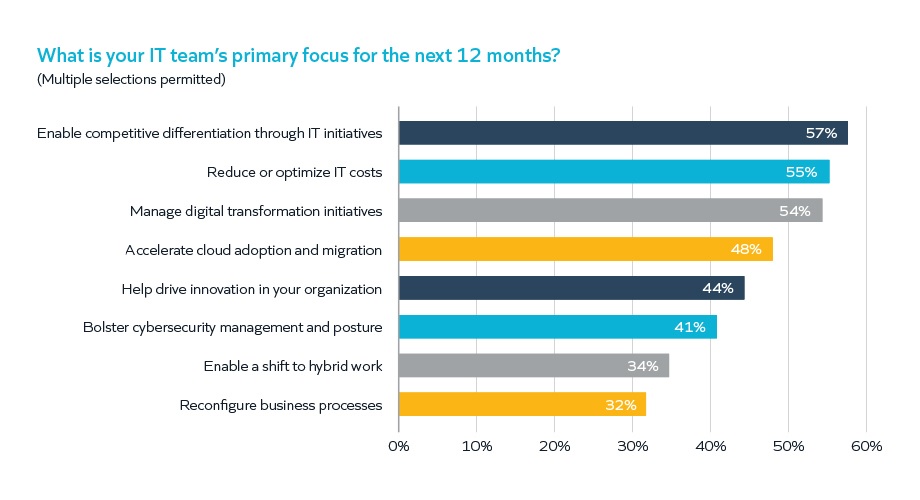 Hybrid vs Remote Work: the Difference is Complexity

Firstly, it is important to recognize that remote and hybrid work bring their own set of complexities. While they have similarities — both bringing the challenges of managing application sprawl, shadow IT and managing costs — they are not the same.

Hybrid work involves managing requirements for both a remote and a physical environment. A hybrid work model must adjust to the ebb and flow of employees who may pivot back and forth, creating a similar technology experience regardless of location. Troubleshooting network constraints at company headquarters while also solving connectivity issues for an employee at home are the reality of hybrid work. For remote-only work, the variables stay largely the same.

Every organization has its own unique needs, and as we saw in the survey, many IT leaders are still dealing with some lingering effects of 2020 decisions. But hybrid is an increasing priority, and the majority of IT leaders are optimistic about the future of hybrid work, with 57% saying they were excited and 44% indicating it was a move in the right direction. 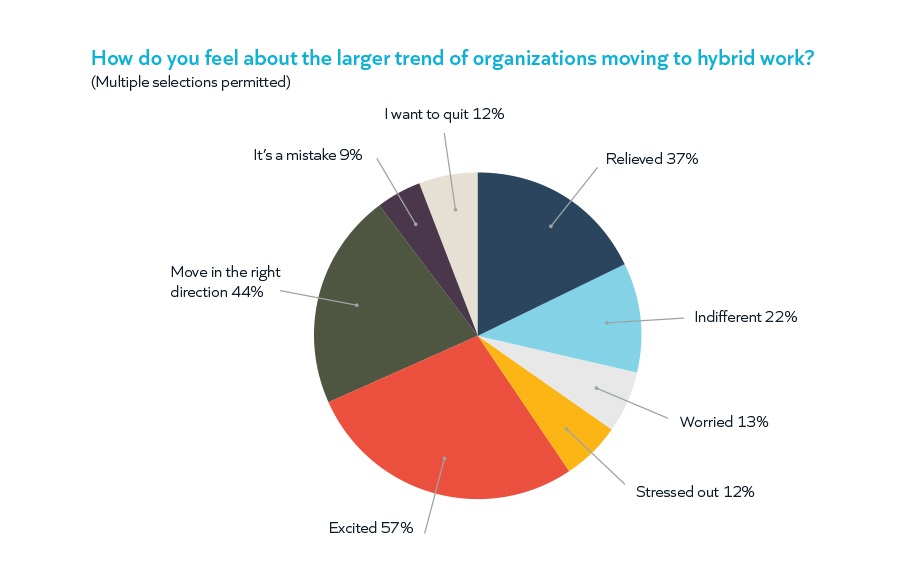 SaaS Sprawl is (and Will Likely Remain) Concerning

According to the survey undertaken by Snow, IT leaders believe the most challenging aspects of supporting or transitioning to hybrid work are controlling costs (18%) and reining in unseen application use (16%). Most organizations surveyed are running hundreds or thousands of SaaS applications across their network, and 73% of IT leaders indicated that this is an increase over the last 12 months. With SaaS continuing to gain importance, it's no wonder that one of the biggest challenges for SaaS is controlling sprawl. Discovering unmanaged SaaS applications remains a priority and will likely be a priority for many years to come. 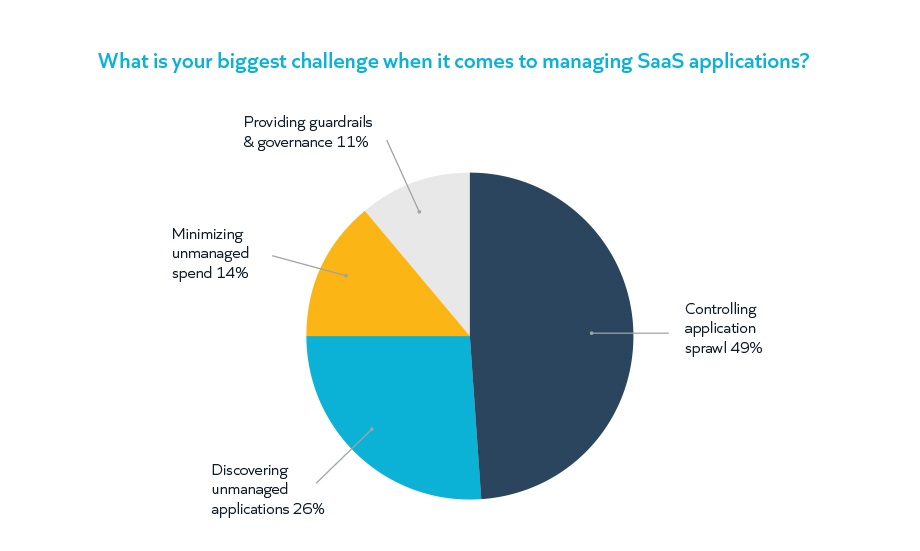 2021 IT Spending Will Increase

With increased complexity comes increased costs. More than 83% of IT leaders expect additional funds to support and implement new ways of working, while 13% said they expected their budget to stay flat and just 2% said they would face budget cuts. If given an additional budget today to support new ways of working, the majority of IT leaders (37%) believe it should be invested in IT staff while other leaders believed that budget should be spent on: 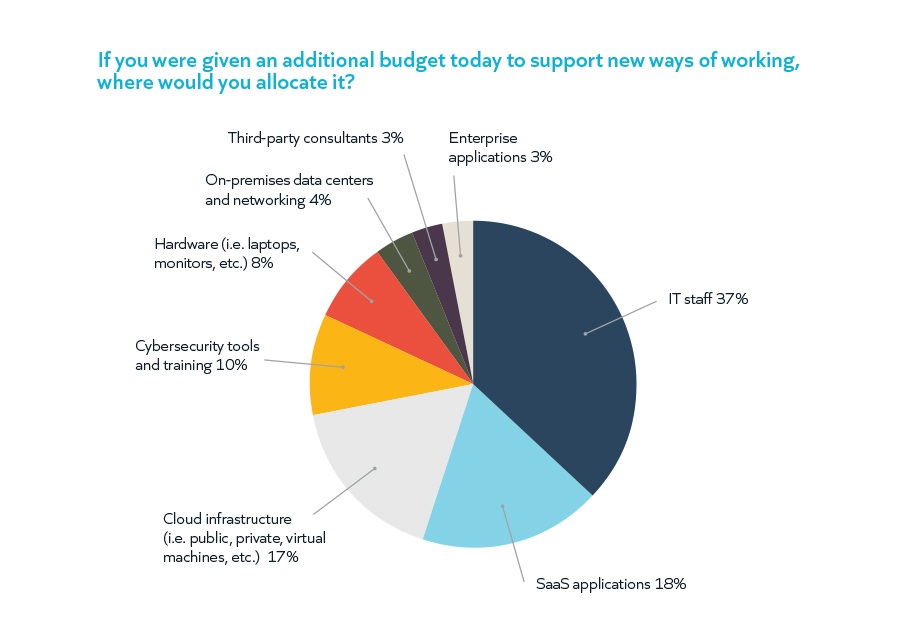 While SaaS spending increased in 2020, according to IT leaders surveyed, this is only the beginning of more significant spending increases we will see as hybrid work becomes the norm. As we continue to navigate the pandemic and embrace the hybrid work model, organizations will need to think more critically about how they can support this new reality. For example, in this new era of hybrid work, vendors like Microsoft are developing solutions for organizations to offer greater flexibility to the hybrid workforce. It is now essential that organizations take the time to review and assess their IT spending and resources to ensure their companies and employees are well equipped to adopt a hybrid work environment.