IT Teams Name Network and Application Monitoring a Top Challenge for 2016
October 29, 2015

All companies rely on having a fast and efficient network. Ensuring optimal network performance is no easy feat for IT teams that are tasked with keeping networks running efficiently and effectively around the clock. A new report from Ipswitch proved that this is a major concern for IT teams coping with increasing complexity – when asked what their top challenge would be in 2016, IT infrastructure and application performance monitoring was the second-leading response.

For this report, Ipswitch polled 2,685 IT professionals to determine the top IT concerns for 2016. The responses, which represented IT pros from all regions of the globe, were analyzed and categorized into eight distinct topic areas. The leading issue was security (25 percent), followed IT infrastructure and application performance monitoring (19 percent) and new technology, updates and deployment (14 percent).

Within the infrastructure category, visibility into the entire infrastructure including systems, MS apps, network, virtual environments, web servers, HTML certificates, etc. was seen as the largest concern for 50 percent of IT teams. General networking performance concerns was the second-leading response getter at 34 percent, including everything from sluggish performance to the capability of the network to handle increasingly complex workloads. 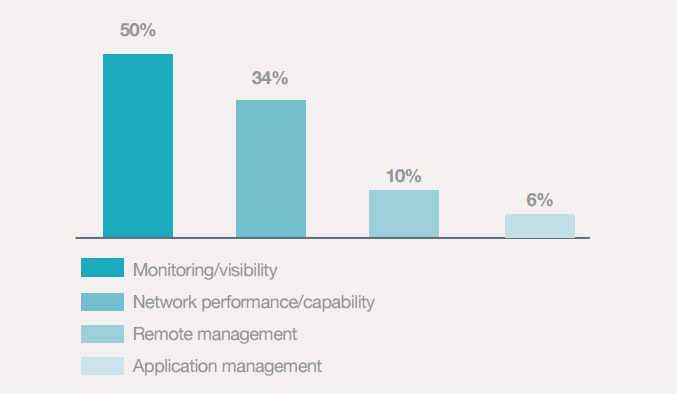 Ten percent of the responses that fell into the infrastructure category indicated that the growing demand for remote access was their biggest concern heading into the New Year, as more employees are working from home and while traveling. Finally, in this category of responses, six percent said application management was a top challenge. As the IT landscape continues to grow in complexity, this report confirmed that IT teams are in a difficult position to identify ways to do more work with less support, time and resources.

Jeff Loeb is CMO at Ipswitch.