The employee priority revolution continues, with a whopping 71% of respondents saying they would prefer to work from anywhere than get a promotion, according to the Everywhere Workplace study from Ivanti. 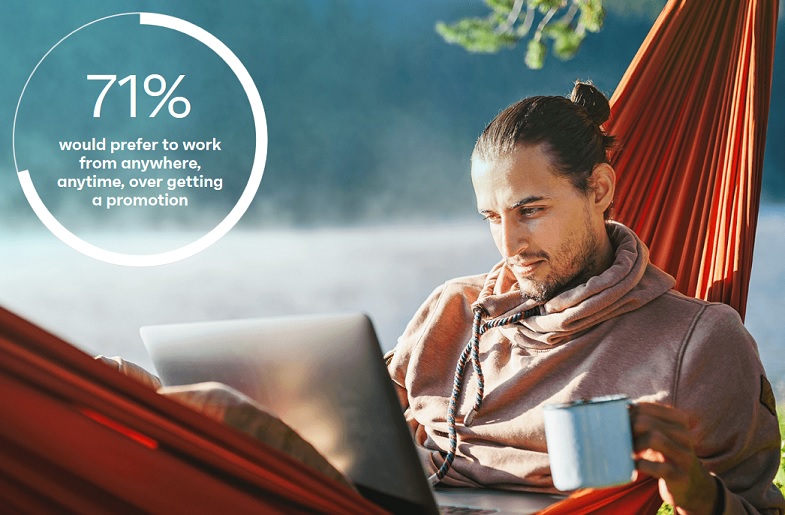 Despite its popularity, remote work is a double-edged sword, with 10% of respondents reporting a negative effect on their mental health.

Additionally, many employees are feeling the effects of losing personal connection with coworkers (9%) and being expected to work longer hours than when in the office (6%).

The report also showed the further gender divide: 56% of female respondents said remote work has affected their mental health negatively, compared to 44% of men. While 52% of women reported having lost personal connection with coworkers, compared to 47% of men.

"Ivanti's research shows that the remote work experience for both office workers and IT professionals varies across gender lines. More men than women report being passed over for a promotion in this digital-first culture. Women, however, are expected to work longer hours, but have benefited the most overall from the flexibility that remote work brings. This shift in employee experience cannot be ignored. Employers must respond by adopting technology that facilitates collaboration and lessens the disparities in experience across gender lines, and that begins with prioritizing employee input in every tech implementation," said Meghan Biro founder and CEO of TalentCulture.

Looking at potential "future of work" models, the research found that 42% of employees prefer a hybrid model of work (a 5% increase since the last study).

30% of employees said they would prefer to work from home permanently (a 20% decrease since the last study) demonstrating that many are looking to interact with colleagues again. This decrease could also be attributed to the fact that while remote work has brought many positive changes — respondents indicated that the top three benefits they have realized since working remotely have been time savings due to less commuting (48%), better work/life balance (43%) and a more flexible work schedule (43%) — there have been some drawbacks.

In fact, 49% of respondents said they have been negatively affected in some way by remote work. Among the top concerns were lack of interaction with colleagues (51%), not being able to collaborate or communicate effectively (28%), and noise and distractions (27%).

"The pandemic has catalyzed a monumental shift in where and how people work," said Jeff Abbott, CEO of Ivanti. "The good news is that by increasing automation of common or mundane tasks, companies can improve work-life balance for IT and security teams, plus prevent data breaches and most importantly improve employee experiences. For example, Ivanti Neurons allows IT departments to reduce complexity, anticipate security threats, reduce unplanned outages, and resolve endpoint issues before employees report them."

The study also found just under a quarter (24%) of respondents have left their job in the past year during the ‘The Great Resignation,' and 28% are considering leaving in the next six months. When looking at respondents between the ages of 25 and 34, the percentage of individuals who plan to leave their job in the next six months jumps to 36%. Return to the office policies are a key factor in driving resignations. Nearly a quarter (24%) of respondents stated that they would quit their job if their employer enforced a full-time return to the office policy.

"Employees have more options than ever before — and they're good options, too," said Biro. "They can go anywhere and work for anyone, so that means that companies have to shift their retention tactics toward implementing the best technology that makes everyone's jobs easier, and more fun."

"Amid the fierce war on talent, it's more important than ever before to build a winning, diverse, and inclusive culture where every individual is highly respected, and a company's mission and core values are demonstrated at every level," added Abbott. "People want to work for companies that are making a difference, and employees are increasingly leaving their jobs if they don't believe in the vision and mission. Companies must show they are delivering global value and not just profits, while also prioritizing work/life balance."

Looking to the future, 26% of survey respondents said they hope IT will provide new hardware such as laptops, desktops and mobile devices in 2022, and 26% hope IT will modernize the service desk. Among IT professionals, the desire to modernize the service desk rises to 32%. This should come as no surprise, as call volumes to service desks have risen during the pandemic, resulting in high operating costs and reduced employee productivity and satisfaction.

Methodology: Ivanti canvassed the opinions of 4,510 office workers and 1,609 IT professionals in the US, UK, France, Germany, Netherlands, Brussels, Spain, Sweden and Australia to understand their attitudes to remote work, points of disagreements among different demographics, and the specific benefits and concerns they have taken from the remote working experience thus far.

According to a recent IT at Work: 2022 and Beyond study, there have been a few silver linings to the pandemic ... The study revealed some intriguing trends, which will be discussed in turn ...

AIOps Rightfully Going Beyond CMDB in the Multi-Cloud Era
November 09, 2022

The absence of topology can be a key inhibitor for AIOps tools, creating blind spots for AIOps as they only have access to event data. A topology, an IT service model, or a dependency map is a real-time picture of tools and services that are connected and dependent on each other to deliver an IT service ...

A modern data stack is a suite of technologies and apps built specifically to funnel data into an organization, transform it into actionable data, build a plan for acting on that data, and then implement that plan. The majority of modern data stacks are built on cloud-based services, composed of low- and no-code tools that enable a variety of groups within an organization to explore and use their data. Read on to learn how to optimize your data stack ...