During the past several weeks we’ve had some fun debating what our experts viewed as 16 of the most damaging, costly and basically annoying issues network administrators deal with on a daily basis. We were inspired to put this together based on the infamous “bracket” that everyone is obsessed with this time of year for the NCAA Basketball Championships.

We started with a field of 16 as opposed to their 64, a sort of “Sour 16” if you will. Just like the real thing, I’m not sure anyone’s bracket was in great shape by the end of the debate and there were more than a few upsets along the way. To add some additional credibility to our exercise we also conducted a survey of more than 100 network administrators to see how they as an organization were approaching March Madness.

Let’s start with the survey as we make the point throughout our own network tournament that big time events can wreak havoc on a corporate network as employees will be tempted, if not committed, to streaming live across one of the several personal devices they are likely carrying to work with them each day. As it turns out, more than half (57 percent) of all respondents reported that employees were indeed streaming games live during business hours which adversely affected network performance.

March Madness has reached such a peak in viewership, made largely possible by the ease of streaming across personal devices, that more than 44 percent of all respondents actually had developed and implemented a plan to deal with high demands on network bandwidth during the tournament.

Additionally, almost 34 percent of all respondents monitored sites being visited, 31 percent set thresholds for bandwidth use, while 24 percent shared policy prior to the event. Nearly 16 percent went so far as to create a dedicated space for employees to watch the games to help manage bandwidth issues.

When asked what types of devices workers use to stream video to watch events like March Madness, company-provided computers (83 percent) ranked the highest, followed closely by smartphones (77 percent). Tablets (55 percent) and personally-owned laptops (46 percent) rounded out the rest of the pack. The findings indicate that the BYOD movement plays strongly into network performance problems caused by popular events.

The research we gathered through our survey really validated the arguments we were having amongst our own team as to which issue was the most damaging to an organization. The original 16 issues were broken down into four regions: Bandit, Grey, Reliability and Influx. Each of these represented common problem areas or themes that network admins deal with daily.

The Bandit region consisted of Bandwidth Hoarders, Understaffed IT, BYOD and Shadow IT.

The Grey was represented by Unexpected Issues, Slow Apps, Shortcuts/Quick Fixes and Lack of Visibility.

On the right side of the bracket we had the Reliability Region with Patchwork Solutions, Outages and Downtime, Shrinking IT Budget and Unresolved Problems.

Our final region, the Influx Region pitted the following four contenders against one another: Adoption of New Technology, Traffic Spikes, Fluctuating Numbers of Users and Point-in-Time Events.

While some of the choices may seem obvious at first, the more they were discussed and rationales were offered, the more difficult it became to advance one issue over another. All of the 16 have the potential to create widespread disruption to the network and a significant loss of productivity. Yet the bracket is never about easy choices, it’s about who can win in the end.

After all of the arguments were made and the votes were counted we eventually got it down to a final showdown between BYOD and Traffic Spikes. I personally found this interesting as you could argue that the first causes the latter. In somewhat of an upset (hello UConn!), Traffic Spikes emerged as our champion. This was largely based on the surprise factor and how quickly they can impede network progress and user productivity.

In one of the more interesting elements to our survey, it turns out that more than 62 percent of all IT professionals polled did not fill out a bracket or take part in NCAA March Madness pool. Given the potential issues this event can create for a network and by extension the network admin, I guess I can understand why.

In the end, this was a fun and interesting exercise to be a part of. What it also did was shine a light on the sheer number of issues that network admins deal with a on a daily basis and why planning for the worst is such a crucial part of maintaining the network.

There’s no need for IT pros to go into overtime. They should be able to easily gain visibility into who is using more than their share of bandwidth, and isolate issues before they spin out of control. Knowing the amount of bandwidth available to your network is like knowing how much gas you have in your car. Run out of either and you are going nowhere fast. 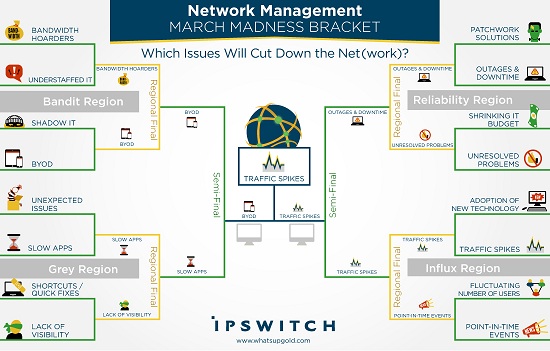