Splunk IT and Observability Predictions 2022
Splunk Executive and Emerging Technology Predictions 2022
AIOps Benchmark Report
Pragmatic AIOps: A Buyer’s Guide
Enrichment for Faster Event Correlation and Root Cause Analysis
APIs in Action
How to Optimize Digital Experience with Service-Level Objectives
The State of Observability 2021
The 2021 Kubernetes & Big Data Report
Improve Performance with Real Insight Into How Queries are Executing
Spark on Hadoop: A Quick Guide
Big Data Cloud Technology Report 2021
Infrastructure Monitoring 101: The Power to Predict and Prevent
The 5 Foundational DevOps Practices
Get Your Cloud & Hybrid Migration Strategy Right in Government
Scalability in Cloud Computing
AI and Machine Learning in Your Organization
Making Sense of Digital Experience Monitoring Solutions
APIs in Action: A Guide to Monitoring APIs for Performance
Six Cloud Strategy Pitfalls and How to Avoid Them
5 Things to Consider When Choosing an APM Tool
The Guide to Modern APM
Splunk Predictions 2021: Executive Report
Fast-Track Your Multicloud Monitoring Initiative
The Essential Guide to Container Monitoring
The Data Age Is Here. Are You Ready?
CIO Dive: How AIOps Cuts Costly Downtime and Supports Teams
Autonomous Operations: How to Intelligently Automate and Scale IT Operations at Global Enterprises
AIOps Brings Calm to Overwhelmed IT Ops Teams
Can AIOps Reduce the Noise?

It is no surprise that in this year's State of the Network annual survey of network professionals, Software-Defined Networks (SDN) was the prevailing topic. Yet in 2009, it wasn't even on the radar. And while SDN is all the buzz, this year's survey showed that not everyone is on the same page. In fact, when asked to define SDN, 37 percent of the network managers and engineers defined SDN as being "like a road trip without a map". 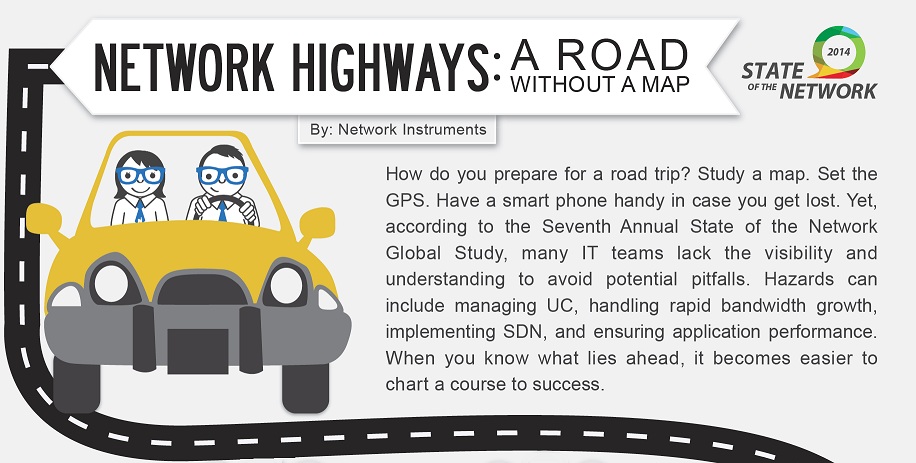 While no clear definition of SDN could be agreed upon, it was very clear that SDN has IT talking, with 12 percent regarding SDN as critical.

The survey also showed that IT departments are at odds with each other as to how important SDN is to a company and why. About 47 percent, nearly half, of network management did not think SDN was important, while more than half of network engineers said they'd just ride out the hype.

Why? Because SDN is not just about cost reduction — it's about making an organization agile. The top drivers of SDN cited in the State of the Network survey included the need to improve the network's ability to dynamically adapt to changing business demands (48 percent) and to deliver new services faster (40 percent). Others indicated lowering operating expenses, decreasing capital expenses, improving the ability to provision network infrastructure and designing more realistic network infrastructures as reasons behind SDN deployment.

With the many major initiatives IT is juggling, such as Big Data, Cloud services, Unified Communications (UC), Bring Your Own Device (BYOD) and 40Gb deployment, it is no wonder that IT departments have SDN in their sights. Whether network professionals can define it or not, many are rapidly deploying SDN while others seem to be evaluating what is hype vs. tangible benefits for their company before future deployment.

About the State of the Network Global Study: The State of the Network Global Study has been conducted annually for seven years. This year, Network Instruments engaged 241 network professionals to understand and quantify new technology adoption trends and daily IT challenges. Respondents were asked, via a third-party web portal, to answer a series of questions on the impact, challenges, and benefits of SDN, UC, Big Data and Application Performance Management. The results were based on responses by network engineers, IT directors, and CIOs from around the globe. Responses were collected from January 10, 2014 to March 7, 2014.

Brad Reinboldt is Senior Product Manager for Network Instruments, a division of JDSU.

www.networkinstruments.com
State of the Network Infographic

As part of APMdigest's list of 2022 predictions, industry experts offer thoughtful, insightful, and often controversial predictions on how Network Performance Management (NPM) and related technologies will evolve and impact business in 2022 ...

Taking Action Against the Data You Have
January 05, 2022

Move fast and break things: A phrase that has been a rallying cry for many SREs and DevOps practitioners. After all, these teams are charged with delivering rapid and unceasing innovation to wow customers and keep pace with competitors. But today's society doesn't tolerate broken things (aka downtime). So, what if you can move fast and not break things? Or at least, move fast and rapidly identify or even predict broken things? It's high time to rethink the old rallying cry, and with AI and observability working in tandem, it's possible ...

AIOps is still relatively new compared to existing technologies such as enterprise data warehouses, and early on many AIOps projects suffered hiccups, the aftereffects of which are still felt today. That's why, for some IT Ops teams and leaders, the prospect of transforming their IT operations using AIOps is a cause for concern ...

This year is the first time APMdigest is posting a separate list of Remote Work Predictions. Due to the drastic changes in the way we work and do business since the COVID pandemic started, and how significantly these changes have impacted IT operations, APMdigest asked industry experts — from analysts and consultants to users and the top vendors — how they think the work from home (WFH) revolution will evolve into 2022, with a special focus on IT operations and performance. Here are some very interesting and insightful predictions that may change what you think about the future of work and IT ...