The 2022 Global State of IT Automation report, co-created by Stonebranch and IEEE Computer Society, highlights the latest research, trends, and benchmarks to help organizations excel in automation and orchestration. Based on a survey of automation-focused IT professionals worldwide, the report offers a unique perspective on the convergence of automation with cloud, DataOps, DevOps, and hybrid IT topics. Read on to learn about the key findings.

According to the study, nearly half (46%) of all mid-size and large enterprise organizations operate in hybrid IT environments that include on-premises, cloud (public and private), and containerized microservices. In addition, approximately 90% report using multiple public and private clouds.

To overcome the new layer of cloud complexity, organizations are rethinking how they orchestrate workflows and data transfers across systems located in on-premises and cloud environments — 88% plan to grow their automation program over the next 12 months. Much of this growth is an evolution from on-premises automation to hybrid IT orchestration: 43% of enterprises will invest in a service orchestration and automation platform (SOAP) by the end of 2022, only two years after Gartner coined the SOAP category in 2020. 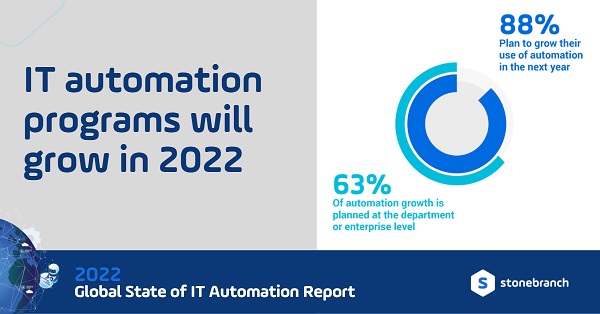 The hybrid model is a key requirement in data pipelines as well. While 90% of enterprises have more than half their data pipeline tools in the cloud, 73% rely on on-premises data management tools. Data sources and tools are changing frequently, too. 78% report adding and removing data sources and tools from their pipeline at least quarterly, if not more often. The agile nature of data pipelines is enabled by the cloud; the need for pipelines to extend beyond a single hosting environment is driving this need for more sophisticated orchestration.

Integrations are critical to navigating the current state of flux in the data environments, sources, and tools. As a result, the ease by which an enterprise can connect their automation and orchestration platform with constantly changing third-party applications and data storage tools has become a critical aspect of new vendor/platform selection.

The big takeaway is that data architects and engineers are eager to achieve true data pipeline orchestration that centralizes the design and management of automated processes existing in multiple tools. 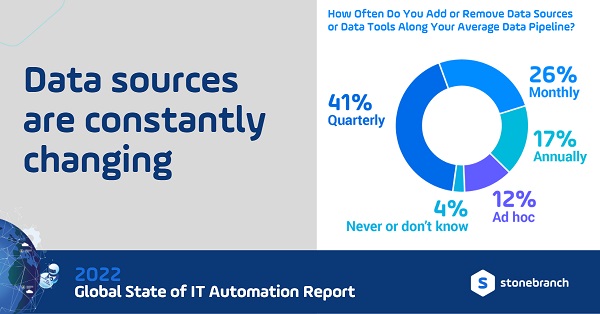 IT Automation Responsibilities Extend Well Beyond the Central IT Team

Larger central teams help democratize IT automation and enable citizen automators by defining standards, implementing reusable automation components, and promoting best practices. This eliminates tribal knowledge and drives people to use a core set of tools. 84% of organizations offer a self-service automation portal to users across the business. 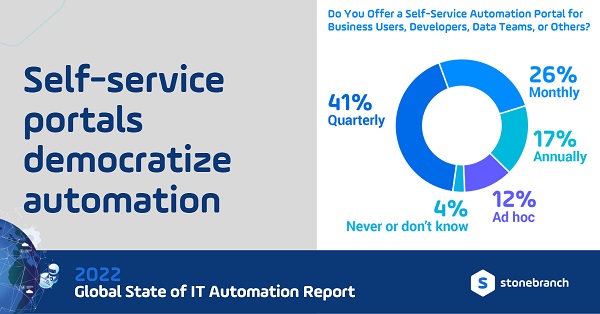 From Task Automation to Centralized Orchestration

With cloud adoption increasing and driving a much more complex IT landscape, traditionally siloed task automation has begun to evolve into centralized orchestration. Enterprise teams that span all departments — from IT Ops to data, development, and business groups — have a growing thirst for automation as a service. Offered by centralized IT automation teams, this service helps connect workflows that span on-premises, clouds, and containers within hybrid IT environments.