ManageEngine Video Zone
Create Seamless Customer Experiences
From Web Interface to Database: Monitor What Matters
The Face of IT Ops from Home
Overcome Real-Time Server and VM Monitoring Challenges
How to Ensure the Performance of Your Cloud-Native Apps
The Future of APM: Bigger, Smarter, More Integrated
Do Legacy Root Cause Analysis (RCA) Techniques Still Work for Modern, Fast-Moving IT?
Can AIOps Reduce the Noise?
Make the Most of Your APM/NPM Tools with AIOps
Autonomous or Bust - What Is The Future of IT Operations?
Can AIOps Cure Your Service Desk Problems?
Assuring Performance in Hybrid Cloud Ecosystems | QOS and User Experience in the Digital Age
How to Deliver Exceptional End User Experience in Your Citrix Environment
How to Ensure High-Performing Microsoft .NET Applications
Four Best Practices for Delivering Exceptional User Experience in VMware Horizon VDI Environments

With over 400K customers, Citrix is defining the digital workspace that securely delivers Windows, Linux, web, SaaS apps, and full virtual desktops to any device, anywhere. Citrix administrators at all these customers are the frontline for addressing dissatisfied end users of those applications and desktops. Unfortunately, even today, understanding real end-user experience in Citrix environments remains an unsolved puzzle.

AppEnsure conducted various surveys in the last six months and discovered some very consistent complaints that have been voiced over many years regarding end-user experience in Citrix environments.

With the rapid enhancements that Citrix is introducing in its frequent releases of XenApp/XenDesktop since 6.5 was introduced (recently 7.13 was made available), a new set of visibility and performance optimization challenges are being introduced. Left unaddressed, these limit the Citrix administrator's ability to understand, diagnose and improve the end-user experience of the delivery. From our surveys, it became evident, as the chart below illustrates, that Citrix administrators do not have the appropriate tools to readily identify performance issues affecting the end-user experience. 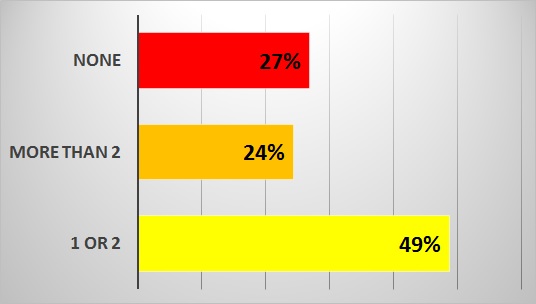 Even in circumstances where Citrix administrators are using multiple tools, there is the lack of visibility needed to solve performance issues with end-user experiences. Hence many administrators, not satisfied with the existing monitoring solutions that they have in place, are searching for new solutions with more effective technology to quickly resolve these issues. 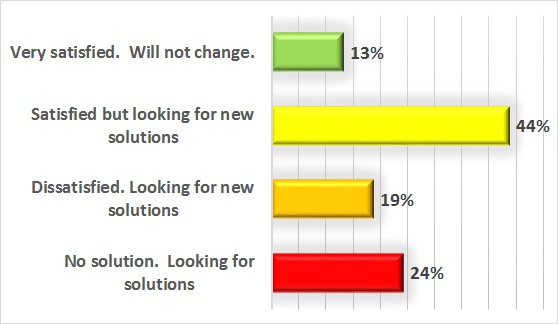 However, when applications and desktops are delivered over Citrix, the Citrix administrators in fact become the front-line for responding to all end-user complaints about slow performance, whatever the cause.

The common complaints that Citrix administrators receive from end-users have been very consistent over the years. Our survey confirmed the fact that most of the time Citrix administrators are fighting fires to address the common problems and just to prove that it is not “Citrix issue”, rather than trying to discover and resolve the actual root cause of the problem. 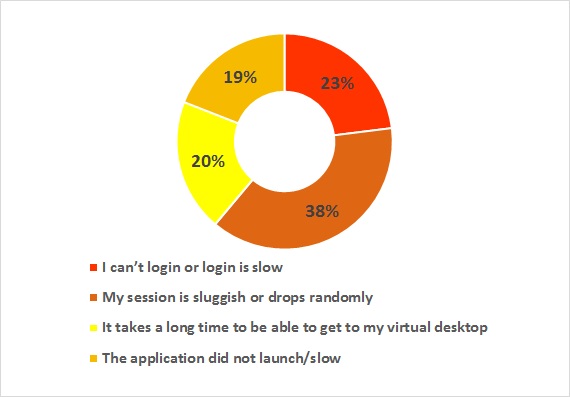 Typically, when end-user issues become show stoppers, Citrix administration resorts to a resolution path that typically involves “fire-fighting teams”, where experts from each technical silo bring reports from the specific tools they use to a collective meeting and compare notes to identify the actual problem. Often these meetings become “blame storming” meetings where symptoms are once again identified, but not the root cause. The frustration that Citrix administrators feel is reflected in the chart below.

Root Cause of the Continuing Enigma

An unsatisfying Citrix experience can stem from many factors external to the app itself. Issues with Citrix can often be traced to SQL, mass storage, Active Directory, and more. Citrix sessions are highly interactive and if there is a glitch, keystrokes don’t show up on time, the screen refreshes slowly, users may be disconnected and lose their work, and in general, productivity suffers. But more than 80% of the time, the root cause of the problem lies outside the Citrix environment.

Citrix is a delivery technology. Besides running on its own servers, Citrix interacts with the database servers, virtualization host servers, Storage Area Networks (SANs), web servers, license servers, applications, and network components such as switches and routers. End users call every problem a Citrix problem because every other component remains hidden behind Citrix.

As a result, a considerable amount of effort is required to correlate data across multiple expert groups to determine which of these components, including the Citrix servers themselves, actually is the problem. Since this takes time, most Citrix administrators are on the defensive trying to prove that it is not a Citrix problem, rather than trying to resolve the root cause of the problem.

What Should an Effective Citrix Monitoring Tool Provide?

The best and most effective way to improve the end user experience is to use a tool that measures the actual end-user experience on every device, not one that just infers response time through correlating commodity metrics (that never ends well).

Then, through repetitive measurement of these response times, it must automatically develop a baseline of response for any given day and time.

Finally, it must automatically alert IT Ops when performance is outside of the baselined norms expected. This gives IT Ops the proactive opportunity, over 80% of the time, to resolve issues before end-users see the slowness which triggers the complaint calls to the Support Desk.

In summary, an effective tool must provide:

■ Auto correlation of events across the stack, without having to pull out logs and manually review them all

■ Auto presentation of logon, App access, screen refresh times, etc. for all users and all transactions

The list of key functionality enables Citrix administrators, who at last can resolve the puzzle, deliver fast end-user performance experiences and cancel the long-standing enigma.

What the Facebook Outage Teaches Us About Error Monitoring
May 28, 2020

On Wednesday, May 6th, iOS users all over the world experienced an app crash when they tried to open popular apps such as TikTok, GroupMe, Spotify, and Pinterest. How did simultaneous crashes occur across so many independent apps? What's the common thread that would cause widespread app crashes? Turns out, it was a change in behavior in the Facebook API ...

How to Enhance SD-WAN Efficiency with DNS-Based Application Routing
May 27, 2020

Keeping networks operational is critical for businesses to run smoothly. The Ponemon Institute estimates that the average cost of an unplanned network outage is $8,850 per minute, a staggering number. In addition to cost, a network failure has a negative effect on application efficiency and user experience ...

The DevOps Changes You Might Not Have Expected
May 26, 2020

Nearly 3,700 people told GitLab about their DevOps journeys. Respondents shared that their roles are changing dramatically, no matter where they sit in the organization. The lines surrounding the traditional definitions of dev, sec, ops and test have blurred, and as we enter the second half of 2020, it is perhaps more important than ever for companies to understand how these roles are evolving ...

IT Pros Prioritizing APM, Hybrid Management and Security
May 21, 2020

As cloud computing continues to grow, tech pros say they are increasingly prioritizing areas like hybrid infrastructure management, application performance management (APM), and security management to optimize delivery for the organizations they serve, according to SolarWinds IT Trends Report 2020: The Universal Language of IT ...

Businesses see digital experience as a growing priority and a key to their success, with execution requiring a more integrated approach across development, IT and business users, according to Digital Experiences: Where the Industry Stands ...

As our production application systems continuously increase in complexity, the challenges of understanding, debugging, and improving them keep growing by orders of magnitude. The practice of Observability addresses both the social and the technological challenges of wrangling complexity and working toward achieving production excellence. New research shows how observable systems and practices are changing the APM landscape ...

Performance Testing Strategy for Digital Enterprise Platforms
May 14, 2020
Digital technologies have enveloped our lives like never before. Be it on the personal or professional front, we have become dependent on the accurate functioning of digital devices and the software running them. The performance of the software is critical in running the components and levers of the new digital ecosystem. And to ensure our digital ecosystem delivers the required outcomes, a robust performance testing strategy should be instituted ...
What Remote Work Data Tells Us About the State of the Enterprise
May 13, 2020

The enforced change to working from home (WFH) has had a massive impact on businesses, not just in the way they manage their employees and IT systems. As the COVID-19 pandemic progresses, enterprise IT teams are looking to answer key questions such as: Which applications have become more critical for working from home? ...

In ancient times — February 2020 — EMA research found that more than 50% of IT leaders surveyed were considering new ITSM platforms in the near future. The future arrived with a bang as IT organizations turbo-pivoted to deliver and support unprecedented levels and types of services to a global workplace suddenly working from home ...