Top CIO Challenges: IT Complexity and Managing IT Performance
September 30, 2019

Digital transformation, migration to the enterprise cloud and increasing customer demands are creating a surge in IT complexity and the associated costs of managing it. Technical leaders around the world are concerned about the effect this has on IT performance and ultimately, their business according to a new report from Dynatrace, based on an independent global survey of 800 CIOs, Top Challenges for CIOs in a Software-Driven, Hybrid, Multi-Cloud World.

CIO responses to the survey indicate that lost revenue (49%) and reputational damage (52%) are among the biggest concerns as businesses transform into software businesses and move to the cloud.

And, as CIOs struggle to prevent these concerns from becoming reality, IT teams now spend 33% of their time dealing with digital performance problems, costing businesses an average of $3.3 million annually, compared to $2.5 million in 2018; an increase of 34%. To combat this, 88% of CIOs say AI will be critical to IT’s ability to master increasing complexity.

Software is Transforming Every Business

Every company, in every industry, is transforming into a software business. The way enterprises interact with customers, assure quality experiences and optimize revenues is driven by applications and the hybrid, multi-cloud environments underpinning them. Success or failure comes down to the software supporting these efforts. The pressure of this "run-the-business" software performing properly has significant ramifications for IT professionals.

According to the survey:

■ 44% of CIOs fear there could be a threat to the existence of their business if they are unable to manage IT performance.

■ As complexity continues to grow, 74% of CIOs say it could soon become extremely difficult to manage performance efficiently. 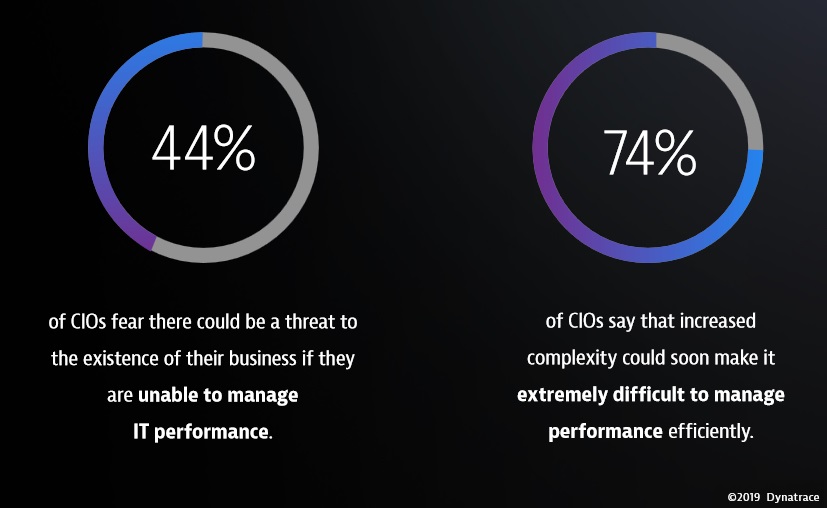 Underpinning this software revolution is the enterprise cloud, allowing companies to innovate faster and better meet the needs of customers. The enterprise cloud is dynamic, hybrid, multi-cloud, and web-scale, containing hundreds of technologies, millions of lines of code and billions of dependencies. However, this transformation isn’t simply about lifting and shifting apps to the cloud, it’s a fundamental shift in how applications are built, deployed and operated.

According to the survey:

■ The average mobile or web application transaction crosses 37 different technology systems or components. This brings an inherent increase in IT complexity, making it harder for organizations to manage performance.

The Age of the Customer Increases Pressure to Deliver Great Experiences

We are squarely in the age of the customer, where high quality service is paramount due to the ease with which customers will try competitive offerings and share their experiences instantly via social media.

The research highlights the extent to which businesses are struggling to combat IT complexity that threatens the customer experience, with CIOs revealing: on average, organizations have suffered 6 IT outages where user-experiences, business revenues or operations were impacted in the last 12 months.

IT Teams Are Feeling the Strain

Digital transformation, migration to the enterprise cloud and increasing customer demands are collectively putting pressure on IT teams, who continue to feel the strain, especially as it relates to performance. Revealing the extent of this dilemma, key findings of the research also show that:

■ More than three quarters of CIOs (76%) say they don’t have complete visibility into application performance in cloud-native architectures.

■ 78% of CIOs are frustrated that so much time is spent setting up monitoring for different cloud environments when deploying new services.

■ IT teams now spend around 33% of their time tackling performance problems.

Exploring the potential antidote to these challenges, the research further reveals that 88% of CIOs say that they believe AI will be critical to IT’s ability to master increasing complexity.