Splunk IT and Observability Predictions 2022
Splunk Executive and Emerging Technology Predictions 2022
AIOps Benchmark Report
Pragmatic AIOps: A Buyer’s Guide
Enrichment for Faster Event Correlation and Root Cause Analysis
APIs in Action
How to Optimize Digital Experience with Service-Level Objectives
The State of Observability 2021
The 2021 Kubernetes & Big Data Report
Improve Performance with Real Insight Into How Queries are Executing
Spark on Hadoop: A Quick Guide
Big Data Cloud Technology Report 2021
Infrastructure Monitoring 101: The Power to Predict and Prevent
The 5 Foundational DevOps Practices
Get Your Cloud & Hybrid Migration Strategy Right in Government
Scalability in Cloud Computing
AI and Machine Learning in Your Organization
Making Sense of Digital Experience Monitoring Solutions
APIs in Action: A Guide to Monitoring APIs for Performance
Six Cloud Strategy Pitfalls and How to Avoid Them
5 Things to Consider When Choosing an APM Tool
The Guide to Modern APM
Splunk Predictions 2021: Executive Report
Fast-Track Your Multicloud Monitoring Initiative
The Essential Guide to Container Monitoring
The Data Age Is Here. Are You Ready?
CIO Dive: How AIOps Cuts Costly Downtime and Supports Teams
Autonomous Operations: How to Intelligently Automate and Scale IT Operations at Global Enterprises
AIOps Brings Calm to Overwhelmed IT Ops Teams
Can AIOps Reduce the Noise?

This blog is the final installment in a 5-part series on APMdigest where I discuss web application performance and how new protocols like SPDY, HTTP/2, and QUIC will hopefully improve it so we can have happy website users.

Start with Web Performance and the Impact of SPDY, HTTP/2 & QUIC - Part 1

Start with Web Performance and the Impact of SPDY, HTTP/2 & QUIC - Part 2

Start with Web Performance and the Impact of SPDY, HTTP/2 & QUIC - Part 3

Start with Web Performance and the Impact of SPDY, HTTP/2 & QUIC - Part 4

It has been almost a year since HTTP/2 has been a ratified standard. I talked about how widely support it is - only 4% of the top 2 million Alexa sites truly support it.

Does your website support it? What about your web host provider?

One place to check is the Google Chrome browser itself by going to Chrome Web Tools. 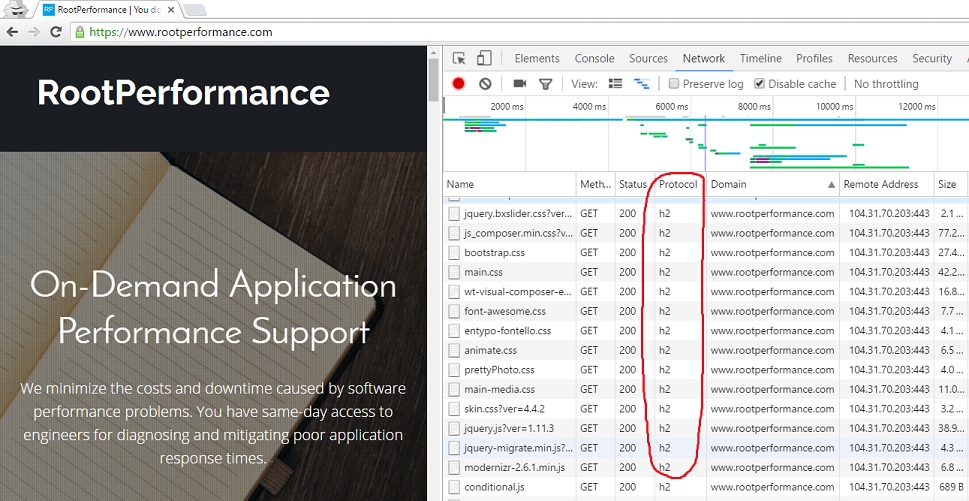 You can also check by doing a packet capture with Wireshark. Or go to tools.keycdn.com/http2-test.

By now, most web browsers support the new version of HTTP. The top five, Chrome, Firefox, IE/Edge, Opera and Safari all support HTTP/2, at least partially. The top two widely used web servers, Apache and Nginx, support it as well.

Previously, I mentioned a number of workarounds that developers used to make their websites faster with HTTP/1.1. Now with HTTP/2, some of these workarounds can actually degrade performance with HTTP/2 implementation.

With only one connection per host that is allowed with HTTP/2, domain sharding can hurt a developer's attempt to improve performance. So if there was used previously, an upgrade to HTTP/2 means that the domains must be unsharded.

Combining Javascript and CSS files into one file helped to reduce the amount of connections on HTTP/1.1. This is no longer needed with only one connection.

However, care must be taken with this. Doing this must be tested on a case-by-case basis. Some large files are able to compress better than smaller files. So it may not be to your advantage to uncombine the files if you have a lot of smaller files.

Inlining scripts directly into the HTML was another way to reduce the number of connections and round-trips to the server. With HTTP/2, this is no longer needed with only one TCP connection.

There are number of advantages of using HTTP/2, including:

■ Address the head of line blocking problem in HTTP

■ Not require multiple connections to a server to enable parallelism, thus improving its use of TCP

But, despite these advantages, there are still some disadvantages that the new protocol version has not addressed.

■ Unable to get around TCP head of line blocking, particularly during packet loss

■ Binary format (for people like me) makes troubleshooting a bit more difficult, not being able to see plaintext, without TLS encryption keys

We Need to Be QUIC

So we see that we still have a number of limitations even with HTTP/2. Although, I have to admit, the last one is somewhat selfish.

One big limitation is the TCP protocol. Due to its connection-oriented nature, there's no getting around the head of line blocking and the time it takes to open and close the connection.

Google wanted a way around this, and in 2012 set out to develop a protocol that runs on top of UDP, which is connectionless protocol. The protocol is called Quick UDP Internet Connections, or QUIC. Another clever name by Google?

Clever or not, Google needed a protocol with quicker connection setup time and quicker retransmissions. Unlike TCP, UDP would allow for this. They wanted to take some of the benefits of the work done with SPDY, that ultimately went into the HTTP/2 standard, such as multiplexed HTTP communication, but running over UDP rather than TCP.

The main goal? To reduce overall latency across the Internet for a user's interactions.

QUIC implements various TCP features, but without the limitations, such as the round-trip time for connection setup, flow control, and congestion avoidance. With UDP's connectionless orientation, RTT is zero since UDP just starts sending data when it needs to rather than talking to the other side to ensure it's available to talk.

The most common place I've come across QUIC being used is on YouTube.

Have you ever compared the speed of a YouTube video compared to some of the other providers like Wistia and Vimeo? Where I live, I'll be lucky to get 3Mbps from my ISP. Watching a video on YouTube rarely buffers. I can almost always count on buffering when watching a video hosted on Wistia or Vimeo. As you can see in the screenshot below, the protocol being used on YouTube is a mix of QUIC and SPDY.

Contrast that to the screenshot I took from Wistia's site, below. 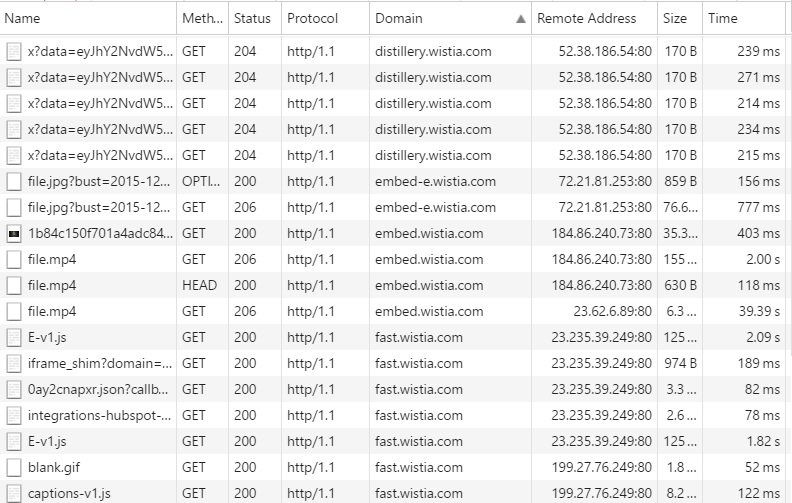 They are still largely using HTTP/1.1. They're not even on HTTP/2 yet. I'm sure they are doing a number of other things to make their web properties faster, but that explains to me why I rarely get any buffering on YouTube compared to Wistia.

If the speed with which SPDY was tested and went into the HTTP/2 standard, which took about three years from SPDY draft release to HTTP/2 draft release, is it possible that we could have a replacement for the TCP protocol on the web in the next couple of years? This should be interesting and exciting!

Jean Tunis is Senior Consultant and Founder of RootPerformance.

As part of APMdigest's list of 2022 predictions, industry experts offer thoughtful, insightful, and often controversial predictions on how Network Performance Management (NPM) and related technologies will evolve and impact business in 2022 ...

Taking Action Against the Data You Have
January 05, 2022

Move fast and break things: A phrase that has been a rallying cry for many SREs and DevOps practitioners. After all, these teams are charged with delivering rapid and unceasing innovation to wow customers and keep pace with competitors. But today's society doesn't tolerate broken things (aka downtime). So, what if you can move fast and not break things? Or at least, move fast and rapidly identify or even predict broken things? It's high time to rethink the old rallying cry, and with AI and observability working in tandem, it's possible ...

AIOps is still relatively new compared to existing technologies such as enterprise data warehouses, and early on many AIOps projects suffered hiccups, the aftereffects of which are still felt today. That's why, for some IT Ops teams and leaders, the prospect of transforming their IT operations using AIOps is a cause for concern ...

This year is the first time APMdigest is posting a separate list of Remote Work Predictions. Due to the drastic changes in the way we work and do business since the COVID pandemic started, and how significantly these changes have impacted IT operations, APMdigest asked industry experts — from analysts and consultants to users and the top vendors — how they think the work from home (WFH) revolution will evolve into 2022, with a special focus on IT operations and performance. Here are some very interesting and insightful predictions that may change what you think about the future of work and IT ...