5 Steps to Get Your Network Ready for the World Cup
June 10, 2014
Ennio Carboni

It’s been four years since the last World Cup and more than a few soccer fans around the globe are eagerly awaiting the big kick-off later this week in Brazil. According to FIFA (the Fédération Internationale de Football Association), 909.6 million television viewers watched at least one minute of the last World Cup final in 2010 between Spain and the Netherlands from their homes. Considering how many people watched from pubs and other public venues, the total number of viewers topped a billion, or about 1 in every 7 people on the planet. Even more impressive, according to FIFA, nearly half of the world’s population tuned in for at least a brief time to watch one of the 64 World Cup matches that year. For a point of comparison, the highest-rated Super Bowl in 2012 drew 111.6 million viewers when the New York Giants took on the New England Patriots. (To avoid confusion, only we Americans refer to the sport as “soccer” while the rest of the world knows it as “football”.) 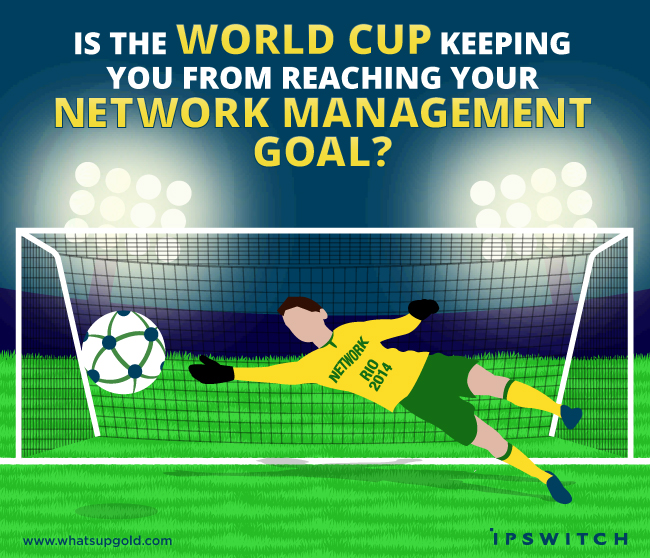 So what does the World Cup mean for your network? A great deal actually. A lot has changed in the past four years when it comes to how people watch sporting events and entertainment. Back in 2010, television was the predominant medium. Fast forward to present day and online video is competing fiercely with TV with viewers watching anything from the morning news to Saturday Night Live on their laptops, tablets and smartphones.

World Cup matches will often run during the American work day. You can bet that many of your employees will be streaming games and highlights across your network on their personal devices or company-issued laptops. As a result, traffic spikes will cause wireless bandwidth issues, network and application performance will take a hit, and along with that, so will employee productivity. Factor in the deluge of resulting help desk support calls and a little pre-emptive strike will go a long way.

Some companies will block access or create policies that prohibit workers from streaming media for entertainment purposes. However, this kind of blacklisting isn’t the right approach. For one reason, it’s complicated to differentiate between streaming content that helps people do their jobs and that which can distract them from the task at hand. There are easier ways to deal with the issue that allow a workforce to stay connected to the World Cup.

Here are five steps network managers and administrators can take to help prepare for the world’s most watched online event:

The best place to start is by educating the workforce on the potential adverse effects of live streaming on the company. To help alleviate the strain on the network, keep a TV in your company’s cafeteria or break room turned on to the World Cup at all times.

2. Stick to the Rule Book

Self-regulation is much better than imposed regulation; however, modifying existing company policies for Internet access is a good fall-back option to ensure network capacity is not negatively impacted.

Use available tools to keep a close eye on the action. Consider monitoring traffic by port number, IP address or data packet. This will help track, control and balance bandwidth usage. Most organizations already have some level of application monitoring and network management tools installed, but often they aren’t being used effectively. These tools can balance recreational use of network bandwidth with that which is mission-critical to the organization.

Once you know your bandwidth players, a few polite words shared regarding company policy will often suffice. If that doesn’t reduce demand, go to the next level.

If you follow these simple steps in preparation for the World Cup, you can avoid turning your colleagues into a bunch of soccer hooligans.

Ennio Carboni is Executive Vice President, Customer Solutions at Ipswitch. He is the company’s lead strategist to ensure customer success in their use of IT management and file transfer solutions, while leading the worldwide global sales organization. Most recently, Carboni was president of the Ipswitch Network Management Division where he was responsible for strategic direction and management of the business. Since joining the company in 2005, Carboni led the division to 300% revenue growth. Prior to Ipswitch, he held leadership positions at CA, IMlogic (acquired by Symantec) and RSA Security where he led product development for the company’s most innovative Internet security solutions. Carboni holds an MS in Criminology and an MBA in Business Administration from Northeastern University.

www.ipswitch.com
The World Cup is Upon Us - But Are We Prepared?
Can the Internet Handle the Expected 2014 World Cup Traffic Records?
World Cup Creating Problems for Business Operations in US

Is your company trying to use artificial intelligence (AI) for business purposes like sales and marketing, finance or customer experience? If not, why not? If so, has it struggled to start AI projects and get them to work effectively? ...

As remote work persists, and organizations take advantage of hire-from-anywhere models — in addition to facing other challenges like extreme weather events — companies across industries are continuing to re-evaluate the effectiveness of their tech stack. Today's increasingly distributed workforce has put a much greater emphasis on network availability across more endpoints as well as increased the bandwidth required for voice and video. For many, this has posed the question of whether to switch to a new network monitoring system ...

Finding the Needle in the Haystack: How Machine Learning Will Revolutionize Root Cause Analysis
September 29, 2021

When a website or app fails or falters, the standard operating procedure is to assemble a sizable team to quickly "divide and conquer" to find a solution. The details of the problem can usually be found somewhere among millions of log events and metrics, leading to slow and painstaking searches that can take hours and often involve handoffs between experts in different areas of the software. The immediate goal in these situations is not to be comprehensive, but rather to troubleshoot until you find a solution that remedies the symptom, even if the underlying root cause is not addressed ...