World Cup Creating Problems for Business Operations in US
July 01, 2014

Earlier this month, I wrote an article published on APMdigest entitled 5 Steps to Get Your Network Ready for the World Cup. Given the rising popularity of the tournament and that the timing of the matches would mostly coincide with the work day here in the United States, there was wide-spread concern that workers would be streaming matches in record numbers and adversely affecting business operations. This article was intended to help administrators prepare for the potential bandwidth spikes and to serve as a warning to those who had yet to give the subject serious consideration.

To help confirm our suspicions of what would take place during the month-long World Cup tournament we commissioned a survey of more than 200 IT professionals in the US to find out more about how the event is affecting corporate network performance and overall business operations. While the results were not necessarily surprising to us, they did highlight an issue within organizations that needs to be dealt with around large-scale events.

According to our survey, approximately two out of three IT admins (67 percent) are currently experiencing IT problems that can be directly tied to employees streaming the World Cup across their corporate network. This ties directly to the fact that despite evidence from earlier this year proving that the streaming of high-profile events such as the Winter Olympics in Sochi and the NCAA March Madness basketball tournament caused disruptions to business operations, only slightly more than half of respondents (53 percent) indicated that they had a proactive plan in place to deal with the high bandwidth spikes.

Of those who did have a plan in place, most were focused on limiting streaming activity. Setting threshold alarms was the most common with 71 percent of respondents while monitoring top applications and blocking certain websites received nearly 60 percent each. Somewhat surprisingly, the encouraging of employees to view the World Cup from a centralized location was a part of the plan for only 32 percent of respondents.

The fact that such a low percentage of IT professionals were prepared to handle the most watched event on the planet was somewhat shocking. This highlights a serious disconnect in how IT prepares for global events and how employees are now consuming information. Throughout the World Cup we’ve been blogging about how statistics show that television is on the decline and that more and more people are choosing to watch events via streaming on wireless devices. And in this case, that means across your corporate network.

We are all aware of the potential negative impacts bandwidth spikes can have on critical business applications and productivity. Slowdowns, lost data and connection issues are just a few of the problems that can bring your workplace to a screeching halt. Let’s face it, we’ve become an event based society where the bigger the event, the more likely we are to tune in. IT needs to recognize this and take the proper steps to monitor network usage and ensure that primary business needs and applications will be met first. And with the big US vs. Belgium game taking place on July 1 at 4:00pm ET/1:00pm PT, there is no better time to start preparing. 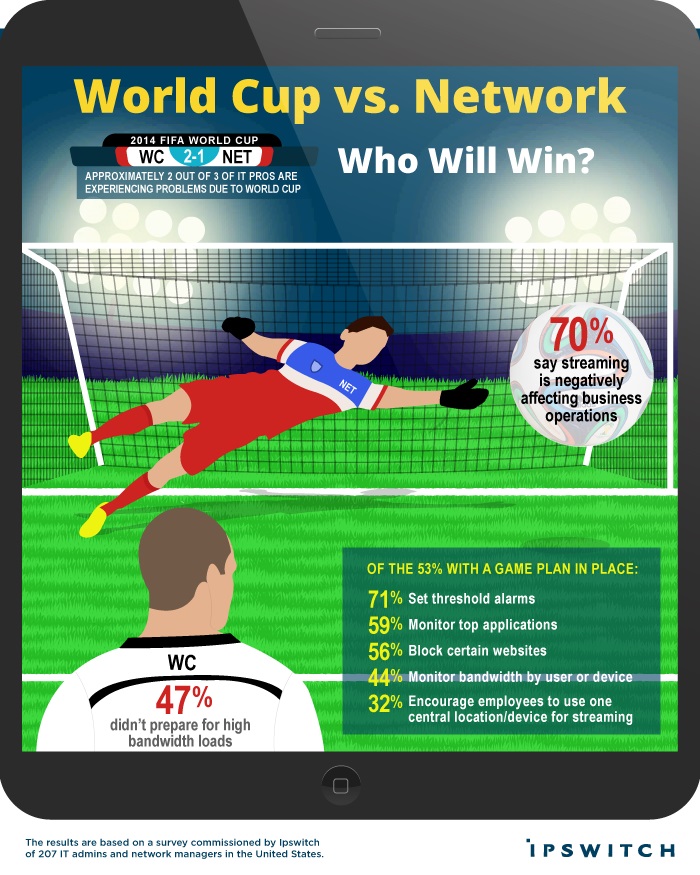 www.ipswitch.com
5 Steps to Get Your Network Ready for the World Cup
The World Cup is Upon Us - But Are We Prepared?
Can the Internet Handle the Expected 2014 World Cup Traffic Records?