In Part 1 of this 3-part blog series, I talk about using WebPageTest to look into why my favorite NBA team's website – the New York Knicks – is slow at times. I talked about the first metric you need to look at when running such testing – the number of HTTP requests.

According to HTTP Archive, a repository of the performance of the world's top websites, the size of the average website across the globe is actually going up. While Internet speeds are going up as well, a heavier website with more data to send is not a good trend. 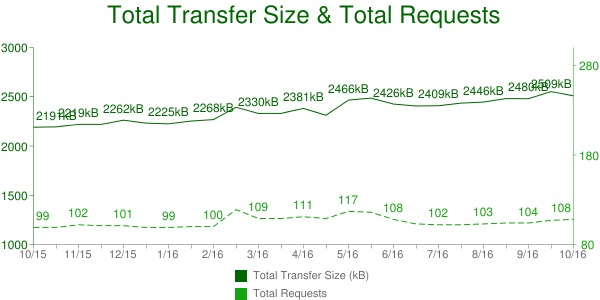 The heavier the website or web application, the more the client has to process. You want to keep processing time down as much as you can.

The reason for these heavier websites is due to the size of the images being used, and to some degree the rapid increased use of video, compared to years past. We humans are very visual. Displaying images can help convey a message much more clearly when accompanied by an image. And in the days of Netflix and YouTube, people are accustomed to consuming a lot of video online. 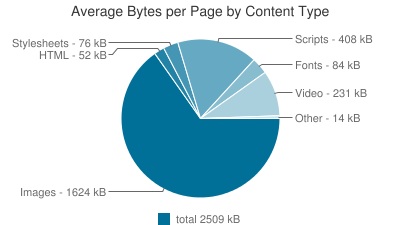 According to HTTP Archive, images make up almost 65% of all bytes of data on an average web page.

In my test of the Knicks website, I get similar results – about 60% of the amount of data that was downloaded are images. 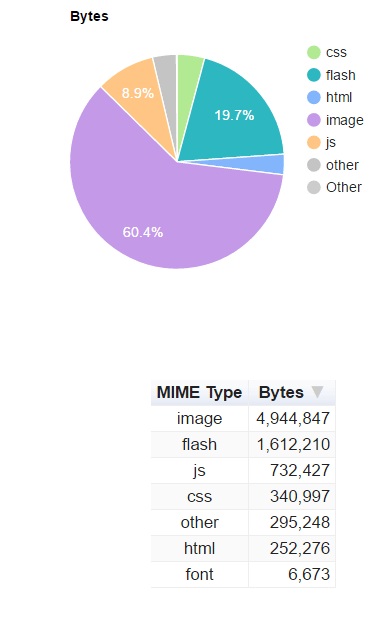 If you add up all those bytes, you get something around 8MB that was transferred to the WebPageTest machine. That's more than 3x the average website monitored on HTTP Archive!

During the test, this was over both a 20Mbps FIOS connection and a 1.5Mbps DSL connection.

Clearly, not every connection is made the same. Some companies have customers from all over the world. Some have fast Internet connections, while others have really slow ones, especially if they're on mobile.

I live in the US, and my Internet provider can only give me DSL. Others in the United States have FIOS and Cable connections that are much faster. So a heavy site, like the Knicks website, is bound to be a performance problem for me and others like me.

This was clearly evident when I tested the site with FIOS and compared it to one with DSL. The difference was almost a 7x response time increase over DSL to FIOS.

Not good for me!

What can be done about that?

Most web server software – by default – allow for the compression of files before sending them to clients. If your server is not doing this, you should enable it. When this is enabled, the amount of the data size sent to the client is reduced.

However, in order for this to occur, both sides have to be able to support compression. It is quite common these days to find that the client browser supports compression, but the server either does not support it or it is not enabled.

All of the top web servers, like Apache HTTP Server, Nginx, Microsoft IIS and others, support compression, so there's really little reason not to enable it.

In my test of the Knicks site, only 58% of the text from the site is compressed. This is a missed opportunity to reduce the amount of data the server sends to the browser by about 585 KB.

For images, only 49% of the total image size is compressed. That means some 51% of the size of images is being transferred across the network at full size. This is another missed opportunity.

In the NBA, 49% is a decent percentage for shooting field goals. Knicks star Carmelo Anthony shoots about 45% for his career, and he's considered a good shooter.

But not with web performance. 49% is bad! There's a lot of room for performance improvements.

So compression should always be enabled if the server supports it.

Just like the number of requests, you can reduce the amount of data sent by doing one thing – not sending it. Caching can be utilized here as well.

For new users, they can get a compressed file when the request is made. When those users return, their client application won't need to make the request again, thereby avoiding having to download this file again. Instead it pulls it from its local cache.

Also, you can use the HTTP Expires header and/or Cache-Control: max-age.

According to the WebPageTest results of my test of the Knicks site, only 8% of static text and image requests are being cached consistently. In the test, the HTTP cache headers for many of the requests are either fairly short or they don't exist. This means that the next time a request for these text and image files is needed, the browser will make an HTTP request to find out whether the file it has is still valid. If the file is still valid, the server's response should be an HTTP 304 Not Modified response.

While some time may have been saved by the server not having to process and transfer the file, it's still time spent across the network for the client to make the request.

The solution would be to utilize the cache headers so that they contain dates far enough into the future, thereby helping reduce the number of bytes transferred to the user's browser and avoiding an additional round trip altogether.

As you saw when looking at the HTTP Archive summary of the websites that it monitors, the bulk of the size of an average website is the images, with about 65% of the total transferred size. Some of these image files can be quite big.

Some sites are not using the best image format like JPEG. Many are using PNG and GIF. There can obviously be good reasons for using these formats. Some images look better with PNG when compared to JPEG or vice versa. 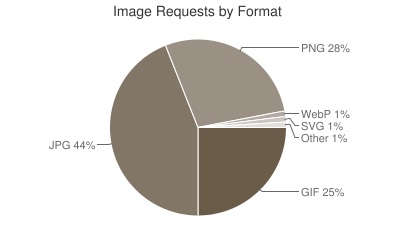 According to HTTP Archive, while JPEG makes up for 44% of images, PNG and GIF together make up a total of 53% of all image formats used by the top websites.

Depending on the type of image, and whether it looks acceptable with some lost quality, there's an opportunity to convert PNG and GIF images to JPEG instead.

Look at the difference between this image I found for all three formats ... 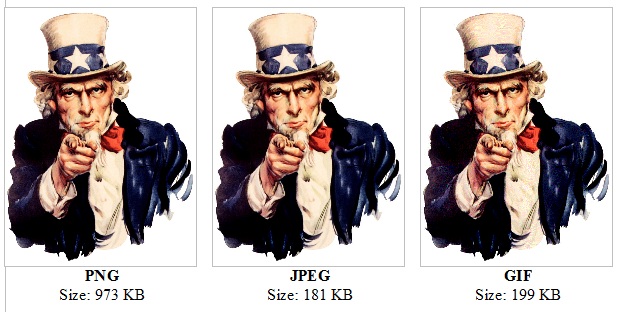 Can you see the difference? Probably not by a lot, if at all. But look at the file size difference between PNG and JPEG. An 81% reduction in size!

On the Knicks site, one of the biggest images they have is a PNG of Kristaps Porzingis. It's big – with a dimension of 760x442 – and a size of 427 KB. Converting that file to JPEG makes it 68KB. That's a 84% reduction in size! That's a lot less data being sent over the visitor's network connection.

Read 3 Key Metrics for Successful Web Application Performance - NBA Edition Part 3, the final blog of the series, where I finish up with the most important metric of all – the one visitors care about – response time.

"Shop ‘Til You Drop" Could Take on New Meaning in Online Black Friday Sales
November 23, 2021

The holidays are almost upon us, and retailers are preparing well in advance for the onslaught of online consumers during this compressed period. The Friday following Thanksgiving Day has become the busiest shopping day of the year, and online shopping has never been more robust. But with supply chain disruptions limiting merchandise availability, customer experience will make the difference between clicking the purchase button or typing a competitor's web address ...

Is Your Business Ready for API Tuesday?
November 22, 2021

The 2021 holiday season will be an inflection point: As the economy starts to ramp up again while the country still grapples with the pandemic, holiday shopping will be the most digital holiday season in history by a long shot ... The work must begin months before, as organizations learn from the year prior and take steps to improve experiences and operations, fine-tune systems, plug in new data sources to enrich machine-learning algorithms, move more workloads to the cloud, automate, and experiment with new tech. These efforts culminate in "API Tuesday" ...

The Future of Work Will Remain Hybrid
November 18, 2021

Most (83%) of nearly 1,500 business and IT decision makers believe that at least 25% of their workforce will remain hybrid post-pandemic, according to the Riverbed | Aternity Hybrid Work Global Survey 2021. While all indicators signal hybrid work environments are the future, most organizations are not fully prepared to deliver a seamless hybrid work experience ...

Investing, Innovating, and Integrating the Mainframe: A Strategy for Success
November 17, 2021

The results of the 2021 BMC Mainframe Survey highlight the consistent positive growth outlook as seen in recent years, with 92 percent of respondents viewing the mainframe as a platform for long-term growth and new workloads, and 86 percent of extra-large shops expecting MIPS (millions of instructions per second) to grow in the coming year. This is not surprising, considering the disruptive nature of the modern digital economy ...

Maximizing Your Automation Investments: 3 Steps IT Leaders Should Take
November 16, 2021

With an accelerated push toward digital transformation, organizations everywhere are trying to find ways to work smarter, not harder. A key component of this new model is finding ways to automate business processes — freeing up employees to focus on more strategic, valuable work and improving customers' experiences. Today's enterprise IT leaders have many options to help drive automation initiatives — from digital process automation and artificial intelligence (AI) to enterprise content management and robotic process automation (RPA) ...

Most (83%) companies would suffer business damage during the first 24 hours of an outage and thereafter, according to Pivoting to Risk-Driven Security Operations, a report from Netenrich based on a global survey of IT and security professionals ...

More than half (60%) of workers said new software had occasionally or frequently frustrated them within the past 24 months, according to a new survey by Gartner ...

Everyone laments technical debt like it were a high-interest credit card. But just like how your CFO uses debt as capital for the business, the intelligent Product Manager knows that technical debt can help finance your path to market if you know how to manage it well ...

Artificial intelligence (AI) may be the brains, but when the market hears the term "AIOps," it puts automation in the mix. After all, what is the use of knowing without doing? ...

The Road to Automation in IT Operations-Part 2
November 03, 2021

How do you ensure your journey to automated IT Ops is streamlined and effective, and not just a buzzword? ...